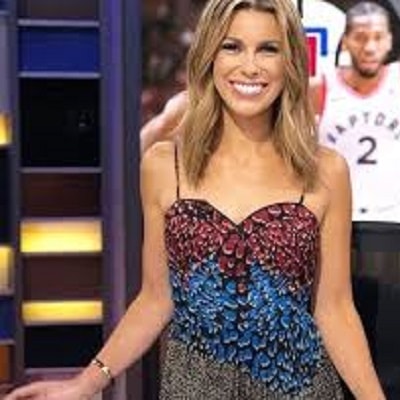 What is the relationship of Jenny Tift?

Jenny Tift is a married woman. She has been married to her long-time boyfriend, Matt Gilroy, an ice hockey defenseman in 2015. The couple first met each other during their college days at Boston University. The couple doesn’t have any children till now. Also, there is no news about her pregnancy until today. They are living together happily in Minnesota, U.S.

Who is Jenny Tift?

Jenny Tift is an American sports television personality, former US National Soccer player, host, and anchor who is currently working as the moderator on Fox Sports 1’s Skip and Shannon: Undisputed.

She was born on 5th September 1987 in Edina, Minnesota, the United States. She was born to her father John Taft who was a hockey player who won NCAA titles as a member and her mother Mary Taft who was a speed skater. In addition, she has a younger brother named Charlie Taft.

Jenny holds American citizenship but her ethnicity is unknown.

In which university did Jenny Tift attend?

She joined Edina High School and later joined Boston University for further studies and graduated in 2010 with a major in Broadcast Journalism.

She stepped in her career in broadcasting with Fox Sports in 2011 where she served as a Fox Sports North sideline reporter for the Minnesota Lynx of the WNBA. In addition, she was also a social media contributor for Minnesota’s Timberwolves, Twins, and Wild sports teams, as well as an in-stadium/arena host at Twins and Wild games.

She got her promotion to join FS1’s news and highlights the update team in 2013 where she served as a track reporter for a 2013 Supercross event and also worked as a reporter for the U.S. women’s national soccer team at the 2015 FIFA Women’s World Cup.

In 2014, she became a college football reporter as a part of FS1’s game coverage. In addition, she was appointed as the lead college football sideline reporter, alongside play-by-play commentator Gus Johnson and analyst Joel Klatt in 2017. Moreover, she has also worked in the NFL, MLB, and the Westminster Kennel Club Dog Show.

In 2018, it was announced that Jenny would be succeeding Joy Taylor as the moderator of Skip and Shannon: Undisputed, hosted by Skip Bayless and Shannon Sharpe. Likewise, she hosted FS1’s CFB: Inside Slant, a weekly college football show on September 5, and she is still working there for the FS1.

How much is the net worth of Jenny Tift?

She has a height of 5 feet & 9 inches and weighs 62 kg. Also, she has dark brown hair with a pair of hazel eyes.