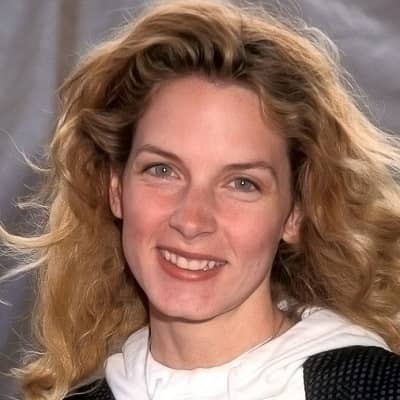 Jensen is happily married to her husband, Marc Chemla.

As the actress maintains a low profile, the information regarding her marriage and wedding is unknown. Some sources state that the couple dated for a long time and got married.

The couple has two children.

Who is Jensen Daggett?

Jensen is a formal American TV and film actress. She is popular for playing the roles like Maggie Reynolds in Major League: Back to the Minors and as Rennie Wickham in Friday the 13th Part VIII: Jason Takes Manhattan.

Jensen was born on June 24, 1969, in Connecticut, the U.S. She spent her childhood in California. The actress holds an American nationality and her ancestry is of  Old French origin.

Yet being one of the well-known actresses, details about her parents are not available. Likely it is also not known if she has any siblings.

She has her schooling at Agoura High School in Agoura Hills, California. After that, she moved to Los Angeles and study acting at the Stella Adler Conservatory for Acting in Hollywood.

After finishing her training, she started her career in the entertainment field. In her initial days, she appeared as a contestant on the game show Scrabble as a teenager in the ear 1984.

The actress debuted in the movie The Fabulous Baker Boys in the year 1989. Soon after, she portrayed the role of Rennie Wickham in Friday the 13th Part VIII: Jason Takes Manhattan.

After it, the actress performed in various television episodes. Talking about the popular roles she played, they are as Nancy Taylor, sister-in-law of Tim Taylor on Home Improvement, and likely as Charlie in The Single Guy playing Jonathan Silverman’s girlfriend. Furthermore, she has appeared in The Opposite Sex and How to Live with Them in 1992, and Telling You in 1998.

She has an appearance as herself in an episode of the HGTV (Canada) show, Weekend Warriors, in which she remodeled her Connecticut home. After it, she became a Green Home Builder. Through it, she has built homes that were featured in different magazines as well.

Working as an actress, Jensen must have accumulated good net worth. But her exact net worth is not revealed.

An average salary of an American actress is $20-$220k per annum.

Jensen maintains a low profile life and her name hasn’t appeared in the media as certain rumors or controversies.

Similarly, she has a beautiful face with blonde colored hair and hazel colored eyes. Her body stats are 29-22-33 inches.

Also, get to know about the birth, career, net worth, and relationships of other celebrities like Jschlatt, Rae Dawn Chong, and Christopher Cody Rogers.