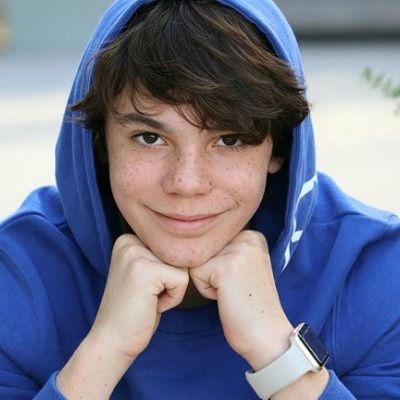 Jentzen Ramirez’s relationship status is single. In his youtube channel, he has uploaded videos related to his crush, Sophie Fergi.

He currently lives in Los Angeles, California, US. His best friend is Piper Rockelle who is a YouTuber.

Who is Jentzen Ramirez?

Jentzen Ramirez is an American actor and YouTube star. He is known for the short film Star Wars: Generations and movies like Of Mind and Music, Beyond the Gates, and, The Lurking Man.

Jentzen was born on Aug 08, 2006, in Austin, Texas, USA. His mother’s and father’s identities are not disclosed.

His ethnicity is Caucasian. He was raised in Texas and has a sister Liana Ramirez who is also an actress.

For acting, Jentzen Ramirez got motivated by his sister Liana. He first appeared in 2014 movie Una Vida: A Fable of Music and the Mind. This film also featured casts like Sharon Lawrence and Joaquim De Almeida.

After this, he appeared in movies like Beyond the Gates (2016), Girl Followed (2017), and The Terror of Hallow’s Eve (2017). His character in The Lurking Man (2017) led him winning the Jury Prize at the Actors Awards for Best Child Actor and Best Ensemble Cast.

Moreover, Jentzen owns a Youtube channel, which is subscribed by more than 252k subscribers. The channel was started on 29 July 2019 and he posts vlogs, last to challenges, 24-hour challenges on his channel.

His video titled as Switching Lives With My Best Friend For a Day has got over 389k views. This video was uploaded on Jan 5, 2020.

This actor has an estimated net worth of $500 thousand US. As per the sources, his estimated yearly earnings from his YouTube channel is between $10.7K – $171.4K US.

The average salary of an American actor ranges between $19k-$210k US.

Jentzen Ramirez has dark brown eyes and hair. His height and weight are 5 ft 4 inches and 58 kg respectively.

Jentzen Ramirez’s Instagram has around 258.7k followers and has posted over 272 posts. In Aug 2019, he shared a photo with dancer Liana Ramirez on his Instagram.