Updated On November 24, 2022 | Published By: Donnie Smith
Share this
Married 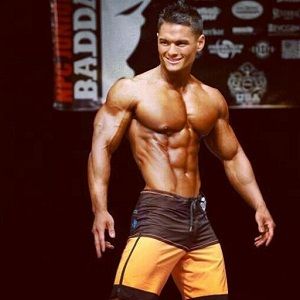 When did Jeremy Buendia and Anastasia Sitch welcome their first child?

Jeremy is married to his girlfriend Anastasia Sitch, a bodybuilder fitness model. They tied the knot in November 2020.

The couple welcomed their first child, a daughter in May 2021.

They went public in the year 2019. The lovebird after coming forth with their romance have shared beautiful memories with each other.

Previously, Jeremy Buendia dated Narmin Assria, an IFBB Pro Bikini Champion at some point. But their relationship could not last long and broke up.

Who is Jeremy Buendia?

Jeremy Buendia is a professional fitness model and IFBB competitor.

He concentrated solely on bodybuilding; trained and prepared very well before he took part in any competition after finishing his football career at of young.

Jeremy Buendia was born in Roseville, California on October 26, 1990. His nationality is American and his ethnicity is Filipino.

His current age is 32. He has hidden his mother’s name but his father’s name is Louie Buendia.

During his childhood, he got inspiration from his father who was a non-competitive bodybuilder and set high standards for Jeremy early on in his life.

Jeremy was always very competitive by nature, which became the principal asset to be a successor in life.

Jeremy Buendia got his education from Whitney High where he became interested in football and was proficient as a line-back.

The other details of his educational background are currently unavailable.

Buendia is a professional weightlifter and bodybuilder. He moved on to the career cause of the vast experience he had with weightlifting.

He developed his mind to take part in competitions after graduating from high school.

His first competition motivated him to compete professionally. Buendia stood in the number six position at the 2008 INBF Capital City Natural Bodybuilding and Figure Championships.

Jeremy returned with an amazing physique to the show after a couple of years of backbreaking work and persistence.

He mounted the stage at the age of 17 and impressed everyone. Similarly, he was able to win the competition and got his first show at the 2010 Contra Costa Championships.

He felt lucky to be the runner-up at the 2012 NPC California Governor’s Cup Championships. Buendia showcased his well-built physique and won the show, 2013 NPC Junior Championships after he had spent so much time dieting and engaging in rigorous exercises.

Moreover, he qualified for the IFBB Professional League competition.

He won the first position at the 2014 IFBB San Jose Pro and also won 2014, Mr.Olympia, as a result of his hard work and determination.

There are no records available at the current time regarding his lifetime achievements and awards.

Currently, there are no records available related to the rumors about his personal life and controversy at the current time.

Jeremy Buendia has got good height and body structure. He is 5 ft 8 inches tall and weighs 75 kg.

He has got black hair and a black color eye.