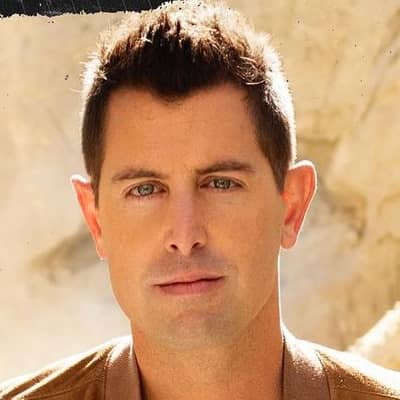 Jeremy Camp is happily married to Adrienne Liesching Camp who is the best friend of Jeremy. She was the former frontwoman for The Benjamin Gate. They married on December 15, 2003. Adrienne is the second wife of Jeremy. The couple blessed with three children.

In 2009, the couple announced that they were expecting their fourth child, but she had a miscarriage after three months.

Previously, he married Melissa Lynn Henning-Camp. The couple met at a Palomar College bible in their study group. Later, they married on October 21, 2000. She was diagnosed with ovarian cancer and died on February 5, 2001, at the age of 21.

Who is Jeremy Camp?

Jeremy Camp is an American Contemporary Christian music and Christian rock singer and songwriter. He is best known for his singles, Stay, Walk By Faith, Jesus Saves, and more.

The singer was born on January 12, 1978, in Lafayette, Indiana, United State. As of 2021, he is 43 years old. He holds an American nationality and belongs to the Caucasian ethnicity. His religion is Christianity. His full name is Jeremy Thomas Camp.

Jeremy Father’s Tom Camp was the pastor at Harvest Chapel whereas his mother’s name is unknown. He has three siblings two brothers named Jared Camp and Joshua Camp a sister named April Camp.

Jeremy has an interest in music since his childhood days. His father taught him to play guitar. At his early age, he also becomes a part of the worship team.

He enrolled in McCutcheon High School. Later, he graduated from Calvary Chapel Bible College in Murrieta, California with a degree in theology.

In 2000, Jeremy began his career in the music industry through debuts studio album Burden Me. Camp released the album stay in 2002 which was certified gold.

In 2004, he released his album Carried Me: The Worship Project which reached #2 on the US Christian chart. Similarly, he released several albums such as Restored (2004), Live Unplugged (2005), Beyond Measure (2006), and more.

Camp’s first single was ‘Understand’ and his other singles album are ‘Walk by Faith’, ‘Take You Back’, ‘This Man’, Let It Fade’, etc.

On March 13, 2012, he released the greatest hits collection entitled I Still Believe: The Number one’s collection.

In 2019, he released his next album, The Story’s Not Over that featured the hit songs “Dead Man Walking” and “Keep Me In the Moment”

Moreover, Camp is also credited as producer for his wife’s album, Don’t Wait, which was released in September 2006

Camp has released eleven albums, four of them RIAA-certified as Gold and two live albums. He has won five GMA Dove Awards and has been nominated for three American Music Awards

Also, he was nominated for a Grammy Award for Best Pop/Contemporary Gospel Album in 2010.

Until now, he has not surrounded by any sorts of rumors and scandals that creates headline in the media. He is far away from the media.

Jeremy estimated net worth is around $8 million throughout his career as a songwriter and singer.

The singer is 5 feet 8 inches tall approximately and his weight is around 70 kg. He has black hair color and his eyes color is blue.

The singer is active on Instagram with the handle @jeremycampofficial where he has over 646k followers. He has a Facebook account with more than 26k followers.

Furthermore, he joined Twitter in April 2008 where he has over 512.7k followers

The “Hot Mugshot Guy”- Jeremy Meeks and the “Topshop heiress”- Chloe Green spotted on another date! Click to find out more!