Jeremy Clarkson is a journalist, writer, and broadcaster. He is renowned as the co-presenter of BBC Two's TV show Top Gear. He is in a relationship with Lisa Hogan.

Jeremy Clarkson is in a relationship with Lisa Hogan. He started dating his current girlfriend, Lisa in 2017.

Prior to that, he was married to his manager, Frances Cain. The wedding took place in May 1993 in Fulham. Together, they have three children that include two daughters Emily and Katya, and a son, Finlo.

Later, in April 2014, they parted their way via a divorce. Before getting a divorce, in September 2010, Clarkson demanded a private injunction to prevent his then-wife, Cain for publishing about their sexual relationship. Later, he lifted the injunction voluntarily.

Before this, Jeremy was married to Alex Hall in 1989. Only after six months, Alex left Jeremy for his best friend, Stephen. Together, Alex and Stephen had two children before their divorce in 1996. 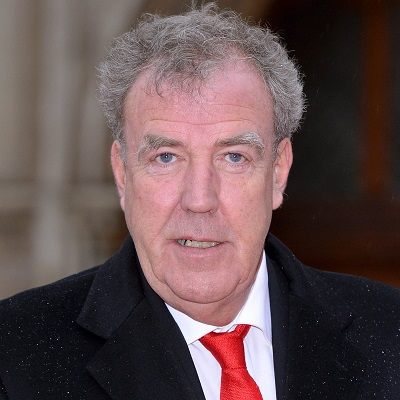 Smokers pay £19,000 a minute to the Exchequer, and that's enough to pay for the whole police force. Or to put it another way, for every £1 we cost the National Health Service, we give it £3.60. Please don't encourage the state to dictate how I live my life.

The only person who ever looked good in the back of a four-seater convertible is Adolf Hitler.

Much more of a hoot to drive than you might imagine. Think of it, if you like, as a librarian with a G-string under the tweed. I do, and it helps.

Who is Jeremy Clarkson?

Jeremy Clarkson is a journalist, writer, and broadcaster. He is renowned as the co-presenter of BBC Two’s TV show Top Gear.

Last, in 2020, he appeared in the Who Wants to Be a Millionaire? as a Host. Next, he will be launching the TV Documentary, I Bought A Farm.

Jeremy Clarkson was born as Jeremy Charles Robert Clarkson on the 11th of April 1960 in Doncaster, Yorkshire.

He has an elder sister, Joanna. They are of British ethnicity. Talking about his educational background, he attended Repton School.

However, he expelled from the school for his nuisance behaviors that include smoking and drinking. During the schooldays, he faced a tough time as he was constantly bullied making him a suicidal wrecked case.

After that, he completed his further education from the Hill House School.

At first, Jeremy Clarkson started his career as the salesman for his parents’ business, Paddington Bear. After that, he joined Rotherham Advertiser where he was trained to be a journalist.

Later, he was associated with newspapers like The Rochdale Observer Wolverhampton Express and Star, and Shropshire Star as a columnist. For those newspapers, he contributed significant numbers of articles based on the car review and more.

Currently, he regularly writes columns for The Sun and The Sunday Times.

In 1998, his career took a major turn over when he was hired to present the BBC Two’s TV series, Top Gear. The show was based on the plot of car reviews and customer advice.

Prior to that, the show was presented by Jon Bentley. The show was rebroadcast in over 1oo countries. Soon, Top Gear became the most viewed show on the channel. Back in 2012, the show’s merchandise made revenue of around £149m that was handle by Bedder 6, Co-founded by Clarkson.

Leaving Top Gear as a presenter, he created the monitoring show, The Grand Tour along with other presenters like Richard Hammond, James May, and Andy Wilman for Amazon. As of 2020, the series is heading towards its fifth season.

Apart from that, he has also hosted Who Wants to Be a Millionaire?

As of 2020, he has an estimated net worth of $60 million. Through his various career options, his salary is in the range of $20 million. However, his base salary as the co-presenter of the Top Gear is around $4 million.

The addition yearly income comes from the 30% rights in the company, DVD Sales, Merchandise, and profit.

His net worth also includes his car’s collection consisting of more than 30 cars. Some of the cars that he owns are Ford Cortina, Ferrari F355, Ford Focus, and Lamborgini Gallardo Spyder.

Back in 2015, he was suspended from the BBC’s TV show, Top Gear when he picked a fight with the show’s producer. The dispute took place at the shooting location in Hawes, North Yorkshire over the catering problem.

At the time, he was offered to have soup with the cold meat platter instead of his steak that he wanted. The problem arose as the hotel chef’s absence. Due to the incident, the next two episodes of the series were not broadcast.

Jeremy Clarkson has blue eyes with light hair. He stands at a height of 6 feet 5 inches and has a decent weight.

Back in late 2019, he had drastic body transformation caused by the weight loss. Later, he revealed the secret of his weight loss is better diet plans. Also, he mentioned cycling he cycled for around three kilometers on a daily basis.

You may also read the bio of Eamonn Holmes, Joe Girardi, and Cindy Hsu.