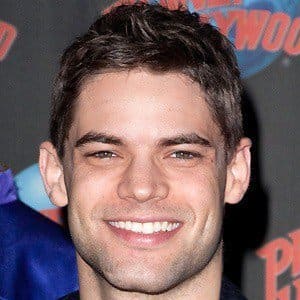 I was very shy and I was very introverted as a kid, but whenever I set foot on stage, I kind of opened up, and I think a lot of kids need an outlet to express their creativity. And a lot of kids are scared to do that if there's not a safe environment for that.

Oh, I try to stay as far away from karaoke as humanly possible!

When you're performing on Broadway every night, you're so much more accessible to people in the industry. Everybody is going to know who you are.

Jeremy Jordan is a married man. He is married to Ashley Spencer. Ashley is also an actress. The pair married on 8 September 2012.

They are blessed with a daughter Clara Eloise Jordan, born April 21, 2019.

They also have a dog named Riley. Their marriage is going strong as there is no news regarding any extramarital affairs at present.

Who is Jeremy Jordan?

Jeremy Jordan is an American actor and singer. People mostly recognize him for his roles as Jack Kelly in the 2012 musical ‘Newsies’ and Clyde Barrow in the 2011 musical ‘Bonnie & Clyde’.

His parents divorced when he was young. Additionally, he has a brother named Joey and a sister, Jessa.

He became interested in singing as a child. He is of American nationality. Furthermore, he belongs to a mixed ethnic background of English, Scottish, Welsh, German, and Ashkenazi Jewish.

Talking about his education, Jordan graduated from Mary Carroll High School. Additionally, he also attended Ithaca College, in Ithaca, New York, and graduated with a Bachelor of Fine Arts in musical theatre.

Jeremy Jordan initially began acting in high school. In addition, he was also active in the choir.  In 2011, he appeared in the TV series ‘Submissions Only’ as Levi Murney. Next, in 2012, he appeared in’ Joyful Noise’. Similarly, Jordan also appeared as Luke in the TV mini-series ‘It Could Be Worse’.

In 2013. Since then, he has appeared in numerous other movies and television series. All in all, he has over 15 credits as an actor.

Some other movies and television series that Jordan has appeared in are ‘Rapunzel’s Tangled Adventure’, ‘The Flash’, ‘Disney’s Newsies the Broadway Musical’, ‘Beth and Charly’, ‘Emily & Tim’, ‘Law & Order: Special Victims Unit’, ‘The Last Five Years’, ‘Elementary’, and ‘Smash’.  Additionally, Jordan also has 8 credits for soundtracks.

Jordan has not revealed his current salary. However, he has an estimated net worth of around $3 million at present.

Jordan became part of a controversy after his attitude towards the fans in San Diego Comic-Con was questioned. His comments about Melissa Benoist and Katie McGrath were considered to be rude and hurtful towards the show’s LGBT fans.

Additionally, he later issued two apologies to fans on his Instagram for his action. At present, there are no rumors concerning Jordan and his career.

Talking about his body measurement, Jeremy Jordan has a height of 5 feet 10 inches and has a decent weight. Additionally, his hair color is dark brown and his eye color is green.

‘Hot Mugshot Guy’ Jeremy Meeks and Topshop Heiress Chloe Green were seen Kissing! Are they Dating? In Relationship? Find out!