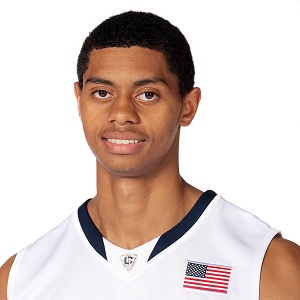 Talking about the relationship status of Jeremy Lamb, he might be in a relationship. As he has posted several photos kissing a girl on Instagram. But there isn’t any solid proof which leads towards his affairs. So as for now, this talented player is considered as single.

His personal life isn’t in the limelight as his career path is. Being a celebrity, his personal stuff is always a matter of discussion and interest to the public.

Who is Jeremy Lamb?

Tall and handsome Jeremy Lamb is a well-known American professional basketball player. He is best known as the player of Charlotte Hornets wearing a jersey number 3.

Jeremy Lamb was born in Norcross, Georgia. He was born on 30 May 1992. He is of African American ethnicity and has American nationality.

His birth name is Jeremy Emmanuel Lamb. He is the son of Rolando(father) and Angela Lamb(mother). His father was a pastor as well as a former basketball player. He was born as the third child among four. One of his brothers’ name is Zach Lamb.

He studied at Norcross High School in Norcross, Georgia where he was the captain of the basketball team. He attended the University of Connecticut where he led his team to win NCAA Championship in his freshman year.

Jeremy Lamb started playing basketball professionally after being selected by Houston Rockets in the 20012 NBA draft. He is active on the sports field from 2012 and he is still active in playing. On 27 October 2012, he was traded to Oklahoma City Thunder where he scored 22 points in a match against Houston Rockets.

His career took on a successful path with his outstanding performance in the games. On 25 June 2015, he was traded to Charlotte Hornets in exchange for Luke Ridnour which helped him to reunite with his college teammate Kemba Walker.

On 2 November 2015, he signed a three-year extension contract with the Hornets worth $21 million. While he was on the team, he suffered a hamstring injury which forced him to miss several matches. Jeremy is still playing from the Hornets wearing a jersey number 3.

He has received the title of NCAA champion in 2011.

Jeremy Lamb: Salary and Net Worth

This skilled player has earned an estimated net worth of around $10 million. He is also getting an annual salary of $7,000,000 from his contract with Charlotte Hornets. He also owns luxurious cars such as BMW M6 Grand Sport, Porsche 911 Turbo and Maserati Levante.

Except for his trade rumor, he hasn’t suffered other rumor and controversy.

Jeremy Lamb has a height of 6 feet 5 inches. His body weighs 82kg. He has black hair and black eyes.