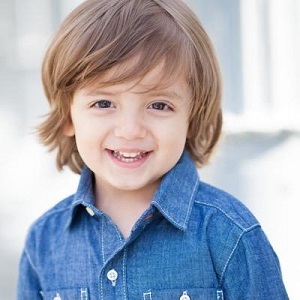 Who is Jeremy Maguire?

Jeremy Maguire is an American child TV actor. He is best known for his role as Joe Pritchett in the hit ABC television series Modern Family since 2015. He has completed 44 episodes of the series.

Jeremy Maguire was born on August 10, 2011, in the United States of America. He is an American by nationality but his ethnicity is North American.

There is no information about his parents. Jeremy was interested in acting since he was a baby boy. Besides acting, he is very active on social media. He is very popular on Instagram and Twitter.

Also, the information on his education is unknown.

Jeremy made his acting debut in the ABC series Modern Family in 2015. He rose to fame when he was cast as the replacement for Pierce Wallace’s character Joe Pritchett in the hit ABC television series Modern Family. Since then, he portrays the character, Joe, in the series.

He has appeared in 44 episodes of the series till now. In 2016, Maguire appeared in a commercial for Tide. He will make his feature film debut in I’m Not Here opposite J.K. Simmons and Sebastian Stan in 2017. In the film, he will be seen playing the character, Trevor.

Jeremy Maguire: Salary and Net Worth

He has a height of 3 feet 9 inches with a bodyweight of 23kg. He has dark brown hair color and his eye color is brown.