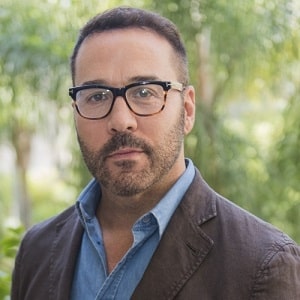 It's your job as an actor to fill out the blanks. I love doing that. To fill in the bones.

I'm a stage actor. That is what I do.

One of the great things that you should never do that I learned from John Malkovich is to never judge your characters.

Unless an entire row of people got up in the middle of a performance and left the theater in disgust, I felt as though I hadn't done my job.

What is the relationship of Jeremy Piven?

Jeremy Piven was previously in a relationship with a 34-year-old Australian Model Sophie Turner and he is single after that.

Though unverified rumors of him dating British model Kelly Brook surfaced in late 2013. Previously, he has also dated actress Vannesa Marcil in 2003.

Who is Jeremy Piven?

Jeremy Piven is an American actor, comedian, and producer. Jeremy Piven has worked in several movies and TV series including “Entourage” on HBO for which he is most known.

Piven was born in New York and raised in Evanston, Illinois on July 26, 1965. He is 56 years old.  He was born to parents Byrne Piven and Joyce Hiller Piven.

His father was a stage, film, television actor and director and his mother was also an actress and they both later founded the famous ‘Piven Theatre Workshop’ in Evanston, Illinois in which Jeremy himself trained.

Furthermore, he has one older sister named Shira Piven who is also an actress and married to the famous Hollywood writer/director Adam McKay.

Piven is an American nationality, raised in a Reconstructionist Jewish family with Ukrainian roots.

He attended Drake University, until sophomore year completion and went to New York University’s Tisch School of the Arts and left before graduating to give an acting career a shot.

He also worked in the movie ‘One Crazy Summer’, released in the same year, starring his friend since high school John Cusack.

However, he is most notable for his work as a hysterical studio head Ari Gold on HBO comedy ‘Entourage’. Similarly, other movies that he has appeared on are ‘Serendipity’,’ The Kingdom’,’ Very Bad Things’, ’Heat’,’ Runaway Jury’.

In addition, other notable shows that Piven was involved in include ‘Larry Sanders Show’ and ‘Ellen (1994-1198)’.

Piven has won three Primetime Emmy Awards (Outstanding Supporting Actor in a Comedy Series) for his role on ‘Entourage’ for three straight years (2006-2008).

Additionally, he bagged a Golden Globe too, in the same category for the same role. He has gained many nominations over the years for that role.

Piven’s net worth is considered to be around $30 million as of 2022, all thanks to his 20 plus years of an acting career and major role in hit series Entourage.

Piven lived a normal celebrity life without any major controversies or scandals until the ‘Me Too’ wave of 2017. Several women have come forward alleging Piven of many sexual misconducts ranging from ‘groping’ to ‘exposing genitals’.

Not to mention, a total of seven women have accused Piven of sexually assaulting them. The allegation dates back as far as 2003.

As for Piven, to this day, unequivocally denies all of these allegations. As a matter of fact, Piven took a polygraph test administered by the American Polygraph Association and has passed the test.

Furthermore, his hair color is light brown. As for the color of his eyes, it’s dark brown.

Piven is very active on all three social media platforms. He uses these platforms to announce his standup comedy dates and his personal thoughts.