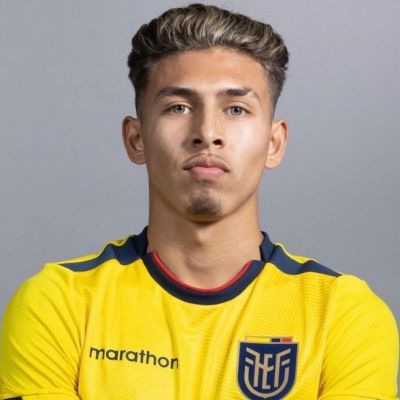 Is Jeremy Sarmiento Single Or Dating?

The 20-years old footballer, Jeremy Sarmiento is single at the moment.

It seems like he is more focused on his career and prefers to stay out the love relationships.

However, if he is ever spotted or if he ever dates any girl in the future, we will update the info as soon as possible.

Who is Jeremy Sarmiento?

He actively plays for the Ecuador national team as well as the Premier League club, Brighton & Hove Albion.

Basically, he plays as a Winger.

Though he was born in Spain, he holds Ecuadorian nationality. As per the astrologers, his birth sign is Gemini.

Moving on to his family background, he was born to his father, Lionel while the name of his mother is not known. He is also yet to reveal the profession and other details of his parents.

Similarly, he has a younger sister named, Charlize Sarmiento.

Though spending a youth career in Charton Athletic and Benfica, on 21 July 2021, he signed for the Premier League side, Brighton & Hove Albion.

On 22 September he made his career debut by coming on as a 69th-minute substitute for the injured fellow player Alexis Mac Allister. However, his team won by 2-0 against, Swansea City in the third round of the EFL Cup.

For the first time, he played his Premier League match on 27 November, by coming out as an 82nd-minute substitute over Jakub Moder, in the goalless draw match against Leeds United.

He signed a new long-term contract on 31 January 2022 which will last till June 2026 with Brighton & Hove Albion again. After his injury on 2 April 2022, he made his comeback as an 88th-minute substitute in the goalless draw match against Norwich City.

At the age of 7, he was called up for the England under-17 team at the 2019 UEFA European Under-17 Championship.

Following that, in October 2021, he was named for the Ecuador national team to play the 2022 World Cup qualifiers match against Venezuela, Colombia, and Bolivia. On 7 October 20221, Ecuador won over Bolivia by 3-0.

Shortly after, he was named for the 2022 FIFA World Cup alongside Brighton’s fellow players, Piero Hincapié and Moisés Caicedo.

In the opening game against the host country Qatar, Ecuador won by 2 goals which were scored by the captain of Ecuador’s team, Enner Valencia. The first game was held at the Al Bayt Stadium, Qatar Sunday, 20 November 2022.

Despite the victory with Qatar, Ecuador lost by 1-2 against Senegal on 29 November 2022.

Jeremy has an estimated net worth of around y $1.5 Million to $2.5 Million.

Despite his expanding popularity, Ecuadorian Midfielder Sarmiento has managed to balance his business and personal lives admirably.

He has never combined his two lives, making it confusing. He has always avoided rumors that have harmed his career. There are no bad rumors or scandals about him on the internet.

The footballer, Jeremy Sarmiento is 6 feet 0 inches tall weighing around 72 kg. In addition, he has a fair complexion, with pair of hazel eyes and light blonde hair.

Heading towards the social media presence of this Ecuadorian footballer, he is pretty active on it.

There is also an official Facebook page under his name, that has garnered more than 27k followers and 13k likes.