Jeremy Shada is a popular American actor, musician, and singer. 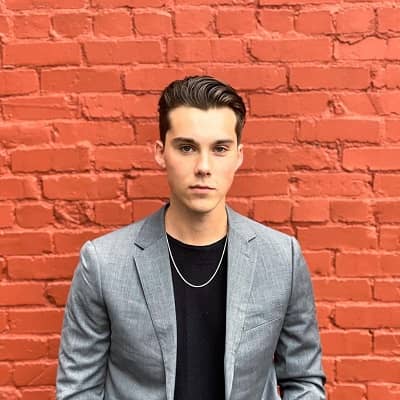 I try not to shut any doors before I even get there. I like doing music. I like singing. I love all music. Music kind of goes hand in hand with acting anyway

I like doing music. I like singing. I love all music. Music kind of goes hand in hand with acting anyway

Dragons, but I'm actually pretty familiar with it.

What is the relationship of Jeremy Shada?

Jeremy Shada is married to his wife Carolynn Shada (Rowland). Carolynn is a dancer affiliated with the Los Angeles Ballet Theatre and is also the sister of popular actor Carson Rowland.

The couple met back in January of 2018 through mutual friends. They hit it off and started dating after a game night at a friend’s house.

And just over a year later, in August of 2019, the pair got engaged.

Jeremy and Carolynn finally got married at a grand ceremony on the 8th of March, 2020.

Jeremy has not shared any information regarding his previous girlfriends and relationships.

Who is Jeremy Shada?

Jeremy Shada is a popular American actor, musician, and singer. He is best known as the voice of Finn the Human in the animated TV series Adventure Time and of Lance in Voltron: Legendary Defender.

Most recently Shada portrayed Reggie Peters, one of the lead roles, in Netflix’s popular musical TV series Julie and the Phantoms.

Jaden Jeremy Shada was born on the 21st of January, 1997 in Boise, Idaho, U.S.A. As of now, his age is 24. His nationality is American but he has not revealed his ethnicity.

Jeremy has not revealed much about his parents as of now. But we do know that one or both of his parents have Czech ancestry as his surname ‘Shada’ is of Czech origin. He also shared that his parents are really supportive and caring.

Jeremy grew up in Idaho and later in L.A. along with his siblings. He has two older brothers Josh and Zack Shada, who are both actors, and an unnamed younger sister.

He was inspired to act by his brother Zack and also had a passion for music from a young age.

Talking about his education, Shada was homeschooled and graduated high school in 2013. He has not revealed whether he went to college or not, but he probably didn’t because of his busy schedule due to acting.

Soon after Jeremy’s family moved to L.A., Shada enrolled at an entertainment agency. He started getting more offers and after appearing in several commercials, he got his first role.

The role came in the television movie Miracle Run where he played the younger version of the main character, Philip Morgan.

Later, in 2009 Jeremy landed his breakthrough role as the voice actor for the main character Finn the Human in the animated series, Adventure Time. The series was also really successful and opened up new opportunities for Jeremy.

He landed the role for Lance in the web series Voltron: Legendary Defender. He also voiced characters in Team America, Cloudy With A Chance of Meatballs, and Incredible Crew.

Career as a Musician and Singer

Jeremy Shada has also made a name for himself as a singer and musician. He has a lot of great songs and musical pieces which were featured in Julie and the Phantoms, Adventure Time and Incredible Crew.

Jeremy has also uploaded a lot of his singles to his Youtube channel as well. And on top of all this, Jeremy is also the bassist and secondary vocalist in the rock band Make Out Monday.

He was also nominated for several more BTVA Awards has more other Awards and Nominations for his voice acting.

As of now, Jeremy has an estimated net worth in the range of 500k to 1 million U.S. dollars. He has not revealed his annual salary as of now.

Jeremy stands at a height of 5 feet 8 inches and his weight is roughly 68 kilograms.

He is blessed with good looks and has built a muscular and athletic physique. His eyes and hair are both dark brown in color.

Jeremy Shada is active and popular on Instagram. As of now, he has already gathered over 1.3 million followers on Instagram.

Get to know more about similar celebrities such as Fred Melamed and Charlie Gillespie.