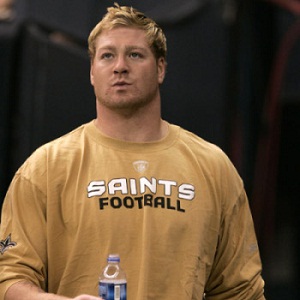 It is known that Jeremy Shockey was married to Daniela Cortazar-Shockey in 2012, but filed for divorce just eight months after their marriage. According to our records, he is possibly single.

Who is Jeremy Shockey?

Jeremy Shockey is a former professional American Football player in the National Football League (NFL). He is best known for his two Super Bowl wins with the Giants and the Saints. He played college football at the University of Miami.

Jeremy Shockey was born on August 18, 1980, Ada, Oklahoma, USA. His nationality is an American and ethnicity is unknown.

He grew up with his parents, Jimmy(father) and Lucinda(mother). He has a brother named James. Jeremy would start getting recognition for his football skills in his school.

After High School, Jeremy went to the University of Miami where he played with the Hurricanes. He would start to shine during his second year, helping the team get an 11-1 record and receiving multiple honors. He then became part of the national championship team in 2001, earning the titles of National Champion and All-American.

After his success, he decided to enter the NFL draft. He was selected 14th overall pick in the 2002 NFL Draft by the New York Giants. His transition to the professional level was easy and he would soon become Rookie of the Year, eventually earning four Pro Bowl appearances during his first five years in the NFL.

In 2005, Shockey signed a five-year contract extension worth $26.38 million, increasing his net worth dramatically and making him the highest paid tight end in the league. He continued to make strong performances but was injured during 2007 which saw him miss most of the season.

During the time of his injury, the Giants would go on and win Super Bowl XLII against the New England Patriots. Shockey was upset about rumors and speculation that the team was fine without him and that they were looking to trade. Eventually, with bad blood between him and the management, the Giants the traded him to the New Orleans Saints.

While he played less time with the Saints due to injuries, he still managed to help the team get a Super Bowl to win against the Indianapolis Colts in Super Bowl XLIV. He played with the Saints until 2011, when he was released. He then signed a one-year contract in 2011 with the Carolina Panthers but was not resigned after apparently playing a good year with them.

Jeremy Shockey: Salary and Net Worth

This player has an amazing career. He has not only gained lots of fame but also money. As the sources have calculated, his net worth is $15 million but his salary is not revealed yet.

In 2002, Shockey said in a radio interview that he hoped there were no gay players in the NFL. “If I knew there was a gay guy on my college football team, I probably wouldn’t, you know, stand for it,” he told Howard Stern, adding “I think, you know, they’re going to be in the shower with us and stuff, so I don’t think that’s gonna work.

He later told the New York Daily News, “I guess I do regret saying it. A year later, New York (magazine) reported that he had mocked then-Dallas Cowboys coach Bill Parcells as a “homo,” a comment he later denied making. A  New York Giants team spokesman later claimed Shockey had been quoting a friend.

Jeremy Shockey has a height of 6 feet 5 inches. His body weighs 114kg. He has golden brown hair and blue eyes.