Soccer player Jeremy Vuolo is married and a father of one. 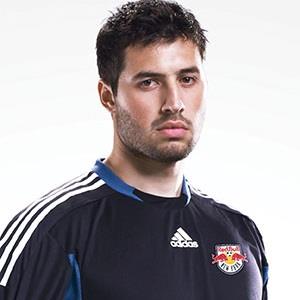 Jeremy Vuolo is a married man. He began a relationship with reality-TV personality Jinger Duggar on December 11, 2015. On July 26, 2016, the couple announced their engagement. Eventually, Duggar and Vuolo were married on November 5, 2016.

Recently, on January 3rd, 2018, Vuolo and his wife announced they were expecting their first child. Their first baby Felicity Nicole Vuolo was born in 2018.

Who is Jeremy Vuolo?

Jeremy Vuolo is an American former soccer player for Major League Soccer and the North American Soccer League. At present, he is a pastor and reality television star.

Furthermore, he currently appears in ‘Counting On’.

Vuolo was born in Downingtown, Pennsylvania on September 5, 1987, to parents Charles and Diana Vuolo. He became interested in soccer in his childhood years.

He is of American nationality. Furthermore, his ethnic background is Italian.

Talking about his education, Vuolo graduated from Hartwick College in 2010 with a degree in Business Administration.

Later, he began playing college soccer in 2006 at Hartwick College, before transferring to Syracuse University in 2010 to complete his senior year.

Vuolo initially appeared for PDL club Reading United between 2005 and 2010. Later, after college, he signed with Finnish club AC Oulu and appeared in 24 games for the team and recorded 11 clean sheets.

Next, he returned to the United States when he signed with Major League Soccer club New York Red Bulls, on January 25, 2012.

Vuolo briefly stepped away from the game to concentrate on full-time ministry, but announced in April 2013, that he had signed with NASL club San Antonio Scorpions.

Currently, he is the pastor of Grace Community Church in Laredo, Texas. Additionally, he and his wife began helping raise awareness to SWAN4kids in 2017.

The organization was founded by Vuolo’s mother and it provides music lessons for children whose parents are in jail. The vision of this organization is to provide these children with hope and improve their lives.

Vuolo has not revealed his current salary. However, he has an estimated net worth of around $ 400 thousand at present.

Jinger and Jeremy have been part of several controversies due to their Instagram posts over the years. His wife Jinger also became part of the controversy due to her controversial outfit.

Recently, there was a rumor that suggested that his wife Jinger might be pregnant. This later turned out to be true. He also became part of another controversy after he was arrested in college after a night of partying.

Talking about his body measurement, Vuolo has a height of 1.9m. Additionally, he weighs around 89 kg. Furthermore, his hair color is black and his eye color is dark brown.

Another Pregnancy On The Duggar Family!! Jinger and Jeremy Vuolo Are Expecting Their First Baby Together