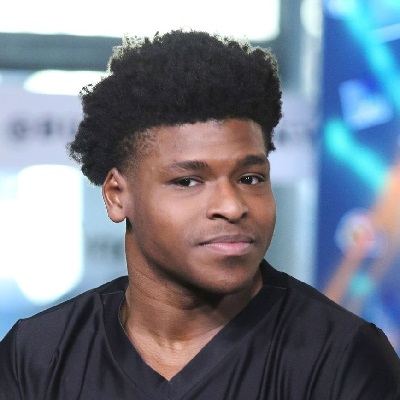 Jerry Harris is openly gay and his current relationship status is possibly single. To the date, he has not introduced anybody as his partner.

As of now, he has not shared any details on his previous relationship and dating history.

Who is Jerry Harris?

American Jerry Harris is a cheerleader and TV personality. He is renowned for making his appearance in Netflix’s TV series, Cheer.

He has also been a member of Louisville’s spirit squad and NCA’s Speed Staff.

Jerry Harris was born on 14th July 1999 in Hinsdale, Illinois, United States. He is of All-American ethnicity. His birth name is Jeremiah Harris.

He spent most of his childhood in Bolingbrook, Illinois raised by his mother, Lizzie Bowman. Details on his father are not available. His mother, Lizzie passed away in 2015 due to Lung Cancer.

Moving towards his academics, he completed his High School education at the Waubonsie Valley High School. After graduation, he joined Navarro College in Corsicana, Texas. During college, he joined the cheer team for the college and got trained under the coach, Monica Aldama.

Also, he earned a regional Scholar Award from the University of Louisville.

In 2020, Jerry Harris started his career as a cheerleader with the TV series, Cheer. Through his very cheerleading documentary, he came into the limelight as the documentary received a huge appreciation from its viewers.

After that, he made his appearance in the cheerleading theme song, Mas(k)or by Todrick Hall in his album, Quarantine Queen during the COVID-19 pandemic.

As of 2020, he has an estimated net worth of $2.5 Million. His earnings as a cheerleader are in the range of $23k to $83k. Besides that, he also makes his appearance in TV documentaries.

On 17th September 2020, he was charged and arrested for the production of child pornography in federal court in Chicago after the two teenagers’ mothers filed a lawsuit against him. The prosectors of the case told that he repeatedly tempted 14- year old twins boy to make sexually explicit videos and photos of himself and send them to him.

During the interviews with law enforcement officials, he admitted to asking for and receiving child pornography from 10 to 15 minors. Also, he admitted having a physical relationship with a 15-year-old in mid-2019.

Currently, the case in court. In the last hearing, the mother of twins asked to keep Harris in custody until he stands at a trial.

Jerry Harris has black eyes with black hair. He stands at a height of 5 feet and 9 inches and weighs around 84 kg.