Jerry Jeudy is a football player. He is currently single.

Jerry Jeudy’s current relationship status is possibly single. Till the date, he has not shared information about his previous dating life.

As of now, he is focused on his career as a football player.

Besides that, he shares a very strong bond with her mother. 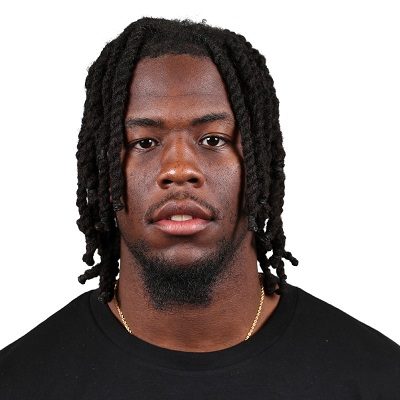 Who is Jerry Jeudy?

Jerry Jeudy is a football player. He is renowned for his offensive style as a wide receiver.

As of now, he is associated with the professional football team, Denver Broncos.

Jerry Jeudy was born Jerry Davarus Jeudy on the 24th of April 1999 in Deerfield Beach, Florida. His mother, Marie is of All-American ethnicity and Haitian roots. Later, he grew up in Pompano Beach, FL raised by his single mother.

He had a younger sister, Aaliyah Jeudy. Aaliyah passed away when she was seven in November 2016. She was born with trisomy 18, a rare chromosomal disease.

During his High School days, he was well known for his skills as a wide receiver. In his senior years of High School, he ended the year with 76 receptions for 1054 yards with 15 touchdowns that made him the third-highest rated wide receiver. At the time he was also rated as the five-star recruit.

– During his freshman year, 2017, Jerry Jeudy ended the with 14 receptions in 264 yards with two touchdowns. The same year, he was named as the MVP player of the college after the A-Day spring game where he contributed 5 passes for 134 yards and two touchdowns.

– In his Sophomore year, he was named as a First-team All-SEC and consensus first-team All-American. Also, he ended the year with 1315 receiving yards with 14 touchdowns. The same year, he went through surgery for a meniscus injury too.

– Moving forward, in his Junior year, he finished the season with 959 receiving yards with 9 touchdowns. The year, also he was named as a first-team All-SEC.

– Later, he became the 15th pick in the first round in the 2020 NFL Draft by Denver Broncos.

– As of now, he is in his rookie year with the team.

The net worth of Jerry Jeudy is $1 million as of 2022. According to his current contract with Denver Broncos, his base salary is $610k.

As of now, he has managed to be far from any sort of controversy and rumors that created headlines in the media.

However, it is not true when it comes to his progress in his skills. Admiring his skills, his couches often gives the statement that he will be doing far more than his performance in his college career.

Jerry Jeudy has black eyes with long black hair. His height is 6 feet 1 inch and weighs around 70 kg. Also, his shoe size is 11 (US).