But their wedding details are unknown. This couple first welcomed their son Stephen Jones in 1964 and two years later their daughter Charlotte Jones was born.

Jerry and his wife’s third child Jerry Jones Jr. was born in the year 1969. 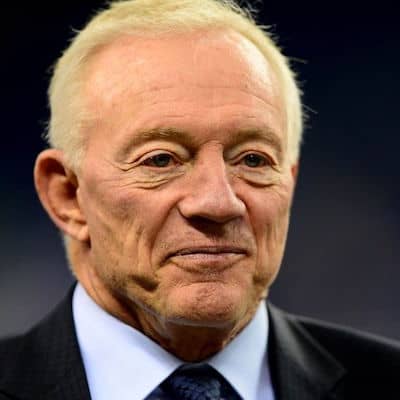 Who is Jerry Jones?

Jerry Jones is an American CEO and entrepreneur. He is known for owning the NFL’s team, Dallas Cowboys.

He founded a firm called Blue Star Land which deals in real estate development projects. In addition, he was also seen in shows such as Coach (1996), Entourage (2010), etc.

His birthdate is 13 Oct 1942 and he was born in Los Angeles, California, the U.S. as Jerral Wayne Jones. The name of his mother was Arminta Pearl Clark Jones and his father was J.W. “Pat” Jones.

His dad passed away in 1997 while his mom died in 2012. Jerry’s ancestry is Caucasian and has a sister named Jacquelyn Jones.

As per his academics, he first attended North Little Rock High School and passed out in 1960. Then he enrolled at the University of Arkansas to achieve a bachelor’s degree in arts.

Jerry Jones started to play soccer during his University days and played for the team of Arkansas. He was in FWAA National Championship in the year 1964 and three times Super Bowl champion.

After his studies, he focused on business and started to set up Shakey’s Pizza Parlor. But this start-up failed and he did oil and gas exploration business. He teamed up with Yankee Global Enterprises and founded a firm that serves entertainment venues.

But his main popularity is associated with a football team. He is the owner, president, and General Manager of an American team Dallas Cowboys. He bought the team in 1989 at $140 million.

This businessman at present is keeping himself away from rumors and desperate scandals. But in the survey of Oct 2003, he was titled as a least-favorite sports personality.

He also faced backlash for firing the favorite head coach of the Dallas Cowboys Tom Landry. The show South Park also made fun of him in episode in seasons 18 & 21.

Jerry Jones’s height is 6 ft 4 inches and his body weight is 82 kg. Similarly, he has light brown eyes plus his hair color is turned in grey.