Updated On November 15, 2022 | Published By: Selina shamp
Share this
Married 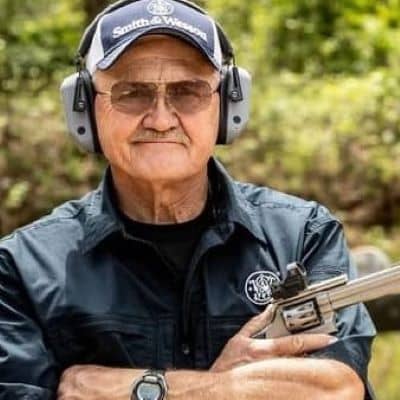 What is the relationship of Jerry Miculek?

Jerry Miculek is a married man. He has tied the knot with Kay Clark Miculek, an American sports shooter. She is the daughter of the gunsmith, Jim Clark Sr. The couple first met in the year 1991 when he was 37 years old. They are happily living together in Princeton, Louisiana, USA.

The pair gave birth to a daughter, Lena Miculek-Afentulin the year 1995. She is also a successful shooter and world champion crowned recently as the best all-around female shooter in the world at the 2014 Trijicon World shooting championship. She is married to Brock Afentul, an actor and director.

Who is Jerry Miculek?

Jerry Miculek is an American professional shooter. He is one of the world’s quickest revolver shooters and has set many world records. He is now giving away his skills by training interested young shooting aspirants.

Also, he has appearances on TV and makes Youtube videos. Additionally, he is a complete handyman, gunsmith, mechanic, certified welder, pipefitter, and machinist.

He was born on September 7, 1954, in Freeport, Texas. He only lived three days in his birthplace but also he has traces of a Cajun accent. According to astrologers, he is Virgo zodiac.

His father’s name is Jerry Charles Miculek and he has four other brothers. Putting light on his childhood, he spent his free time shooting at a local dump in Gramercy, Louisiana with his younger brother, Donnie Miculek. His educational details are concealed but he definitely has completed high school.

What are the body features of Jerry Miculek?

He has a height of 5 feet 4 inches and weighs around 65 kg. His other vital body details like shoe size, chest size, biceps, and other details are currently missing. he has a fair round face, grey hair, and brown eyes and he loves to keep a mustache.

Briefing his career, he first worked as a millwright at Freeport Chemical for fifteen years. Then, his career as a professional shooter began in 1989.

On the date September 11. 1999 he set three world records simultaneously, Fire six shots, reload, fire six shots from 1 revolver within 2.99 s. Fire eight shots from a revolver on a single target in 1 s.

Fire eight shots from a revolver on four targets (2 hits each target) in 1.06 sec.

To date, he has shot over 2 million rounds of ammunition, approximately 30 tons of lead.

Reflecting light on its good fortune of Jerry, it has mustered around $110 Million. He leads a luxurious and lavish life through his hard-earned money.

Despite earning from shooting records and training others, he also earns tertiary from YouTube.

According to the social blade, his estimated annual earning from YouTube is $4.9K- $78.3K. His other salary details are not available for now.

Talking about his social media presence, he is active on Instagram with 238k followers and has around 507 posts. He is also available on Facebook with 898k followers.

Though he is not available on TikTok his works are loved there as well.

To date, he has successfully managed to keep himself from rumors and unnecessary controversies. Also, he has maintained a clear and low profile and not mixed his professional and personal life.