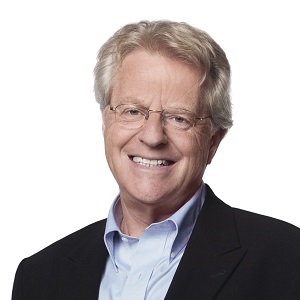 You're a transsexual fighting with a hermaphrodite over a mistress

All of us, whether or not we're celebrities, every one ought to spend part of their life making someone else's life better

Jerry Springer is currently single. He was married to Micki Velton on June 16, 1973. The duo met for the first time while she was working for ‘Proctor and Gamble’. The couple has welcomed a child together. But, the couple could not hold the relationship and end with divorce in 1994. After that, he has not been linked with anyone.

Who is Jerry Springer?

Jerry Springer is an England born American talk show host, politician, news presenter, actor, musician, and former lawyer. He was the host of ‘The Jerry Springer Show’ from September 30, 1991, to July 26, 2018. Jerry will be hosting a new courtroom show named ‘Judge Jerry’ in 2009.

He was born on February 13, 1944, in Highgate, Middlesex, England and he is currently 75 years old. His birth name is Gerald Norman Springer. His mother’s name is Margot Springer and his father’s name is Richard Springer.

His father owned a shoe shop in East Finchley and his family shifted there. His mother also worked there as a bank clerk. Later in 1949, the family shifted to the USA and began living in Queens, New York.

He completed his schooling from Forest Hill High School. And then, he joined Tulane University, New Orleans, Louisiana and earned BA majoring in political science. Later, he achieved a Juris Doctor degree from Northwestern University in 1968.

After the completion of a law degree, he got the opportunity to be in contact with Robert Kennedy, New York Senator, during a social event. Jerry was signed in order to do the presidential campaign but Kennedy was assassinated shortly afterward.

He became emotionally traumatized after the assassination of Kennedy and he decided to carry on with Kennedy’s political ideology. The, he began working at Frost & Jacobs law firm in Cincinnati, Ohio.

He contested for Congress in Ohio in 1970 and almost defeated the already established Republican politician, Donald Clancy. But, he got elected to the Cincinnati city council by the following year. Later, he was removed from the post in 1974.

But, after serving five terms with the council, he got elected as the mayor of the Cincinnati in 1971. Then, in 1982, he fought for the position of the Governor of Ohio but ended with signing as a political reporter and commentator in Cincinnati NBC affiliate, WLWT. He became No.1 news anchor of Cincinnati and won ten local Emmy Awards for his nightly commentaries.

His show, ‘The Jerry Springer Show’ was first aired in 1991 which was designed by WLWT and addresses topics like gun politics and homelessness. The show addresses tabloid sensationalized topics after three years in order to popularize it.

Then, Jerry hosted a David Letterman-style talk show named ‘Late Night with Jerry Springer’ from 2000 to 2001 and also hosted the UK version of ‘Greed’ during the same time. The British version of ‘The Jerry Springer Show’ was launched in 2005 and the show was titled as ‘The Springer Show’. The show gained a lot of popularity and in the same year, he hosted ‘Springer on the Radio’.

Apart from politics, he is also active in the field of acting. He made his appearance in the films like ‘The X-Files’ in 1996, ‘Sabrina, The Teenage Witch’ in 1999, ‘Space Ghost Coast to Coast’ in 1999, ‘Saturday Kitchen’, ‘Jason Ellis Show’, and many more.

He is also a member of Cincinnati city council and mayor of Cincinnati. His one of the famous show ‘The Jerry Springer Show’ has been running since 1991.

He was awarded the Golden Apple Award in 2001 and Razzie Award in the category Worst New Star for ‘Ringmaster’ in 1999.

He has earned a huge sum of money from his career, which is estimated to be around $60 million.

He had to leave the Cincinnati City Council in 1974 as he hired a prostitute. His career was thought to be over by the political analyst but later he recovered his career.

Jerry has a height of 6 ft. Also, Jerry has got light brown hair and dark brown eyes. Other information regarding Jerry’s weight, shoe size, biceps, etc. are unknown.