Jerry Stiller was an American comedian and actor. Jerry Stiller is not having an affair with anyone presently.

Jerry Stiller was previously married to actress and comedian Anne Meara. The pair married on 14 September 1954. The pair was together until Anne’s death on 23 May 2015.

They have two children from this relationship: actor Ben Stiller and actress Amy Stiller. 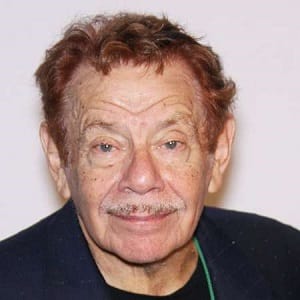 The worst thing in this business is to be thought of as a no-talent.

Never go for the punch line. There might be something funnier on the way.

I don't think my judgment is that good. I don't know what is funny.

Hollywood never knew there was a Vietnam War until they made the movie.

Creative comedy is like growing geraniums in a mine field.

Who was Jerry Stiller?

Jerry Stiller was an American comedian and actor. People mostly know him for his role as Frank Costanza on the NBC sitcom ‘Seinfeld.’

He passed away on May 11, 2020, at the age of 92 in the Upper West Side of Manhattan, United States. The cause of his death is natural.

Stiller was born as Gerald Isaac Stiller in Brooklyn, New York City, New York on June 8, 1927. He was born to parents Bella and William Stiller. His paternal grandparents immigrated from Galicia.

Jerry became interested in the world of comedy and acting from an early age. He was of American nationality. Furthermore, there are no details available about his ethnic background at present.

Talking about his education, Stiller attended Seward Park High School. Additionally, he also attended Syracuse University and has a bachelor’s degree in Speech and Drama.

Jerry Stiller and his wife, Anne Meara formed the comedy team Stiller and Meara which was successful in the 1960s and 1970s. Additionally, they also appeared in several radio commercials. In addition, the duo hosted HBO ‘Sneak Previews’ from 1979 to 1982.

People know Jerry for the role of the short-tempered Frank Costanza in the sitcom ‘Seinfeld.’ Since then, he has appeared in several other movies and television series. All in all, he has over 100 credits as an actor.

Some other movies and television series that Stiller has appeared in include ‘Zoolander’, ‘Cousins’, ‘Fish Hooks’, ‘Swinging with the Finkels’, ‘The Good Wife’, ‘Wonder Pets!’, ‘The King of Queens’, ‘Sex and the City’, ‘Teacher’s Pet’, ‘On the Line’, ‘My 5 Wives’, ‘Chump Change’, ‘The Independent’, ‘The Suburbans’, ‘In the Heat of the Night’, ‘The Pickle’, ‘American Playhouse’, ‘Little Vegas’, ‘Tattinger’s’, ‘Murder, She Wrote’, ‘That’s Adequate’, ‘Hairspray’, ‘The Hustler of Money’, ‘Screen Two’, ‘Tales from the Darkside’, and ‘The Love Boat’ among others.

Furthermore, apart from his career in show business, Jerry is an author. He wrote the foreword to the book ‘Festivus: The Holiday for the Rest of Us.’

Stiller garnered the nomination for Primetime Emmy Award in 1997. Additionally, he won the American Comedy Award in 1998.

In addition, Stiller had also won the Golden Apple Award in the Big Apple Film Festival and Screenplay Competition. He received the Star on the Walk of Fame in 2007.

Stiller had not revealed his current salary. However, he had an estimated net worth of around $ 12.5 million at present.

Stiller made the news recently after he was rushed to a New York City hospital. He was later confirmed to be perfectly healthy.

Furthermore, Jerry had not been part of any notable controversies in his career.

Talking about his body measurement, Jerry Stiller had a height of 5 feet 5 inches (1.63 m). Additionally, his hair color was dark blonde, and his eye color was blue.