There is a new mother in the entertainment block! The star of the TV show Jersey Shore Deena Nicole Cortese has delivered. She posted the happy news on her social media on Saturday.

Deena Nicole Cortese of Jersey shore fame has delivered. She shared the great news on her social media. Deena wrote on her Facebook:

She mentioned in her post about the dimensions of her baby boy complete with the length which she put as a whopping 20.5 inches. The baby is healthy and adorable.
The father of the child is her husband Chris Buckner. Both are extremely happy and excited to be new parents and share new responsibilities together.

Deena Nicole also described her love for her husband when she saw him hold the baby. Deena shared more pictures of the baby in her Instagram and captioned it by the following praise for her husband:

“I never thought i could love Chris anymore than i did until i saw him hold CJ.”

The relationship of Deena Nicole Cortese and Chris Buckner

Deena Nicole, 31 and Chris Buckner began dating and got married in October 2017. The wedding ceremony was held at a winery in New Jersey which is their hometown. Chris Buckner is 29 years old. Deena announced about her pregnancy in July 2018. She said via her Instagram:

“Chris and I Decided to wait until we were ready to spill the beans! Now that we are safely into our second trimester.. us and our little monkey are ready to tell the world Our little family is growing !”

“We have a sweet little boy on the way! We Are truly blessed and our hearts are filled with so much joy and happiness. December can’t come soon enough! Daddy and Mommy can’t wait to meet you Christopher John you are going to be the most spoiled little boy ever!!!!” 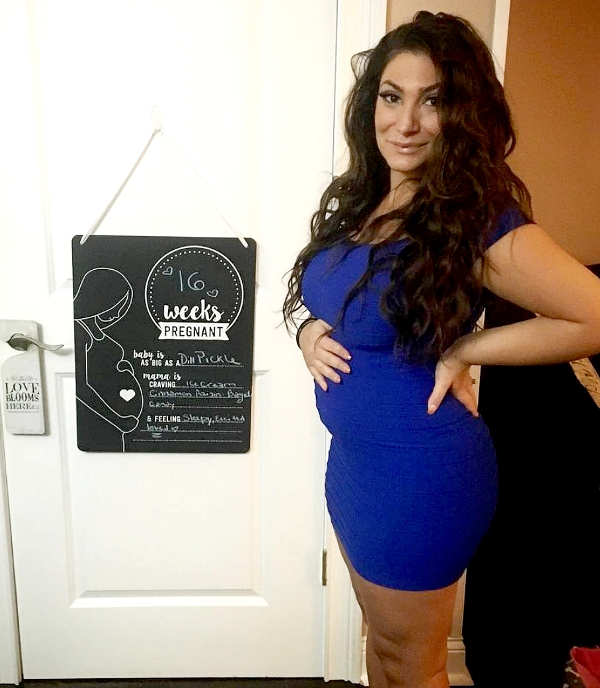 The Jersey Shore: Family Vacation star had earlier revealed in an interview that her husband has a desire for three children but that she would prefer only two. She said:

“I would be fine with two children.”

The other stars who also have become proud parents

A number of other stars of the show became proud parents of kids and some have their babies on the way. Nicole Snooki Polizzi has her third child on the way. She has elder two children named Lorenzo(son), 6 and Giovanna (daughter), 4 with her husband Jionni LaValle. Jenni JWoww Farley already has little ones named Meilani (daughter), 4 and Greyson (s0n), 2 with her estranged husband Roger Matthews.

Paul DJ Pauly D DelVicchio is also a father to Amabella, 5 whose mother is his ex Amanda Markert. Ronnie Ortiz-Magro already has a new arrival daughter named Ariana who is just 8 months now. The mother of this child is Ronnie’s on-off girlfriend Jen Harley. So Deena’s son would have a lot of company as her grows.

Deena Nicole Cortese is an American reality television personality. She appeared on the MTV reality show ‘Jersey Shore’ from 2011 to 2012. More Bio…