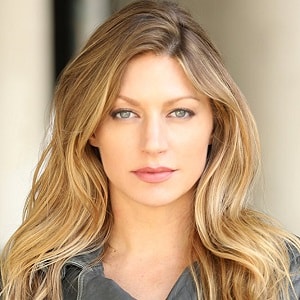 “If you bring in actors right when you're breaking story, it has a 'too many cooks in the kitchen' effect.”

Jes Macallan married her boyfriend Jason Gray Stanford in 2012. He is a Canadian actor. The couple was spending their time together but an internal conflict arose between them.

Then, they decided to break up and finally divorced in 2017.

Who is Jes Macallan?

Jes Macallan is an American actress and he is famous for her role as Josslyn Carver in the ABC drama series ‘Mistresses’ and as Ava Sharpe in the drama ‘Legends of Tomorrow’.

She was born on August 9, 1982, in Sarasota, Florida, USA. She is currently 36 years old. Her birth name is Jessica Lee Liszewski. Her father’s name is Kenneth S. ‘Ken’ Leszewski and her mother’s name is Theresa Marie ‘Terry’.

She is the eldest of seven children in which she has got three sisters and three brothers.

She attended the University of Florida and graduated from there with an International Marketing Degree. She also graduated from Maggie Flanigan Studio in New York City. Macallan also joined Bocconi University based in Milan.

She debuted her career as a model in early 2000s. Then, she made her appearance in different television series which include ‘NCIS: Los Angeles’, ‘Grey’s Anatomy’, ‘Justified’, ‘Shameless, ‘Femme Fatales’, etc.

She portrayed the leading role in the ABC drama series ‘Mistresses’ in 2012, alongside Yunjin Kim, Rochelle Aytes, and Alyssa Milano. Later, she made her appearance as Agent Ava Sharpe, a Time Bureau Director in ‘In Legends of Tomorrow’. Macallan became the series regular for season 4.

She made her film appearance in the movies like ‘Thirst’ which is a book adaptation and a science fiction thriller film. Later, she appeared in ‘The Mentor’, ‘An Uncommon Grace’, ‘The Engagement Clause’, etc.

Also, Macallan is the director, writer, and producer of the short film ‘SELF,E’. She wrote the film named ’12 Days Together’ with her friend and with an actor Jerry O’Connell.

She works as an ambassador of Best Friends Animal Society and is a strong supporter of Rally for Kids with Cancer, which is a charity event that supports research in pediatric cancer.

Talking about the awards and nominations, she has not been able to achieve any of them till date.

She has an estimated net worth of around $500,000 and she has earned that sum of money from her acting career.

She has maintained her celebrity status. Macallan likes to keep herself away from her social media. Therefore, she has not been involved in any rumors and controversies in her career to date.