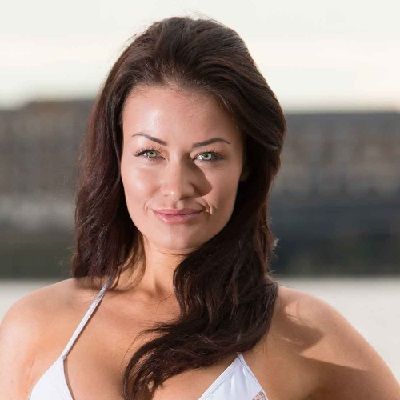 The relationship status of Jess Impiazzi is currently single.

Previously, she was married to Denny Solomona. Denny is a rugby footballer. He plays the rugby union as a winger for the Sale Sharks in the Aviva Premiership.

Who is Jess Impiazzi?

She has appeared in most of the top men’s magazines, especially after winning the Miss Tropic Beauty Bikini contest.

Recently, she was the host of 2019’s EssexTV Awards.

Jess was born on 9th March 1989 in London, England. She is the daughter of Mr. Impiazzi and Donnie Impiazzi of Anglo-Italian heritage.

Her mother Donnie is a patient of Uveal Effusion Syndrome. She lost her eyesight almost 12 years ago.

Jess trained at the Italia Conti Academy of Theatre Arts in Barbican, London which she eventually dropped out to look after her visually impaired mother.

Jess was hit by another tragedy just a few months after her mother lost her eyesight. Her 13-month-old nephew expired due to meningitis and septicemia.

Taking care of her mother and spending more time with her helped Jess come out of depression.

She started her model career in 2009 and posed for top magazines. She worked for British national papers including The Sun, Nuts, Zoo, and Loaded.

For her official 2017 calender, she was photographed nude.

Jess Impiazzi’s first TV appearance was on The Only Way is Essex. After that, she was on the popular show Ex on the Beach.

In the year 2016, she made her movie debut in the British crime drama Retribution.

Similarly, she played the role of Ashley Queen in the movie, Dangerous Game. She is also on Sky Sports as a walk-on girl.

Jess Impiazzi is a blue-eyed brunette. She is 5 feet 6 inches tall and weighs around 60kg.

You may also check out the age, parents, career, net worth, body measurements, and social media of Scotty T, Julie Anne San Jose, and Shaun Keaveny

Charlie Clapham and Jess Impiazzi are quietly dating now since the past many months!