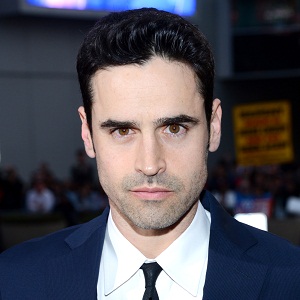 I love being around kids

they're honest and refreshing, and I love teaching them new things

I think I tend to live in sort of a meta state of existence where I'm always analyzing and analyzing whatever I'm going through at any given moment, and a lot of times I'll reflect back on and go, 'Oh look at that - if I acted this way when that happened, I might not have thought of that that way

Everyone always told me I was fated to be in front of the camera.

Nothing is in detail about his previous relationship status because of his privacy. Currently, Jesse is married to Andrea Watrouse in December 2018. On the 18th of December 2020, Jesse and his wife announced on Instagram they were expecting a baby girl due 2021. They are sharing a very romantic relationship for more than a decade.

Who is Jesse Bradford?

Jesse Bradford is an American actor. He is known for his roles in Romeo + Juliet, Bring It On, Clockstoppers, Swimfan, Perfect Life and Sequestered. Jesse was also nominated for Best Young Leading Actor in a Feature Film.

Jesse Bradford was born in Norwalk, Connecticut on May 28, 1979. His nationality is American and ethnicity is mixed(English, German).

His education started at Elementary School. He was a very good student at the school. Later he graduated from primary school. Then he went to Brien McMahon High School for his higher studies where he became the most popular student of the school. Showing his interest in tennis he became the captain of the school’s tennis club. After his schooling, he went to Columbia University and gained a bachelor’s degree in Film.

Jesse’s career started when he was in his mom’s lap. He did the Q-Tip Commercial at the age of only 8 months. He did his movie debut in Falling in love at the age of 5. Jesse worked as a child actor in many movies like Presumed Innocent, My Blue Heaven, The Boy Who Cried Bitch, King of the Hill and others.

He also had an admiring work on Romeo+Juliet as Balthasar in 1996. Later in 2002, he did the lead role in the movie Clockstoppers and Swimfan. He also worked in many movies like Happy Endings, Flags of Our Fathers, The Echo and I Hope They Serve Beer in Hell as a lead role of Drew. The story was based on Tucker Max’s best-selling book. He was seen on the big screen every year. Last year he did the movie The California No and The Year of Spectacular Men. He also worked for television in Teachers as Jacob.

Jesse’s total net worth is around $3 Million Dollar and his salary is unknown.

It was once rumored that Jesse is having an affair with an American singer Azealia Banks but none of them accepted it true.

Jesse Bradford has a height of 5 feet 8 inches. His body weighs 70kg. He has black hair and brown eyes.