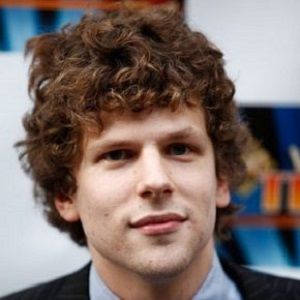 No compliment is ever sufficient and every insult, of course, is true

Don't be a hero, live to fight another day

Smart and cute Eisenberg is an unmarried person. He never spoke openly about his relationships, so that everyone can appreciate his work rather than commenting on his personal life.

Currently, he is in the relationship with Anna Strout since 2002. The couple split up in 2012 after a decade of a successful relationship. In the year 2013, his name was linked up with Mia Wasikowska an Australian actress.

They managed to continue their relationship till 2015 and then separated. Soon after that he again hooked up with his longtime girlfriend Anna Strout and the couple has already welcomed their baby boy in April 2017.

Moreover, his name linked up with Kristen Stewart after she states that she loves Eisenberg after they shared the curtain together in movie ‘Cafe Society’.

Who is Jesse Eisenberg?

Jesse Eisenberg is an American actor, author, and playwright. He is popular for the role of Facebook founder Mark Zuckerberg in the movie The Social Network (2010).

In the movie The Social Network, he got several nominations in various categories. His character as a magician in movie Now You See Me (2013) got huge recognition followed by its sequel Now You See Me 2 in 2016.

Eisenberg was born to Barry Eisenberg and Amy on October 5, 1983, in Queens, New York and grew up in New Jersey. His nationality is American and ethnicity is Ashkenazi Jewish.

Jesse’s mother teaches cross-cultural sensitivity in hospitals and his father is a professor in a college who teaches sociology, who previously ran a hospital.

Before coming into film industry he was doing theater such as Summer and Smoke and The Gathering (1999). He began his film career from the 2002 movie Roger Dodger from which he got huge appreciation.

Eisenberg was raised by his parents alongside with his sisters Hallie Eisenberg and Kerry Lea in New Jersey. From the very young age, he focused more on acting rather than study. Eisenberg wasn’t healthy enough to attend the school because of an anxiety disorder. After that, he started to play acting from the early age.

In the age of 7, he made his first appearance in a children’s theater production. The Gathering was his first professional appearance, at the age of 16.

Eisenberg completed his high school from East Brunswick Public School and later joined High School of Performing Arts in New York. He was a liberal arts student at the New School University, New York in which he concentrated on democracy and cultural pluralism. He also got an opportunity to attend New York University but he refused it for his film.

Eisenberg made his Television debut in the series Get Real, from 1999-2000. He got pretty positive reviews from his early movies Roger Dodger and The Emperor’s Club which released in 2002. His breakthrough moment was in the horror comedy Zombieland (2009), which saw him with Emma Stone and Woody Harrelson.

Eisenberg got huge recognition for which he portrayed Mark Zuckerberg in the 2010 blockbuster The Social Network. He reached new heights after the success of this movie. He has also voiced in the box animated Rio (2011) and Rio 2 (2014)as the main character Blu. His recent project is Justice League (2017) where he starred as Lex Luthor.

Eisenberg showed his talent and interest from the very early age and won his first award when he was just 18, from Roger Dodger for the most promising actor at the San Diego Film Festival. He grabbed the Best Actor Award from the National Board of Review of Motion Pictures for his superb role as Mark Zuckerberg in 2010 The Social Network.

He was also nominated for the various award shows such as BAFTA Awards, Golden Globes and Academy Awards for the best actor.

The Social Network actor was in a controversy after he started criticizing host  Romina Puga from the beginning in an interview back in 2013. Romina responded Eisenberg saying you’re such a jerk,’ Later, she stated ‘Jesse Eisenberg isn’t very nice’.’So, I was just humiliated by Jesse Eisenberg’.

Once he was stuck in a controversy after being criticized on Twitter when he misdefined the word ‘genocide’.Furthermore, he was criticized by many saying his role as  ‘Lex Luthor’ was weakest and depressing character in huge commercial success ‘Batman V Superman’.

Jesse Eisenberg: Salary and Net Worth

Eisenberg looks too cute with his curly brown hair and innocent face. He has a medium height of 5 ft 9 inches and a weight of 65 kg.  His body measurements are 41-15-32 and his shoe size 10 US. His greenish-blue eyes look so attractive which makes him more charming.