Jesse Jo Stark is a singer and songwriter who released her EP Dandelion. She is currently dating a British Singer.

Jesse Jo Stark is currently dating a British singer. Her affair with Dominic Richard Harrison aka Yungblud hit the media in early March 2021.

As per the sources, their relationship is few months old. They were seen having cozy moments at a party in Rainbow Room, LA.

Her boyfriend was rumored of dating another singer/actress Miley Cyrus. 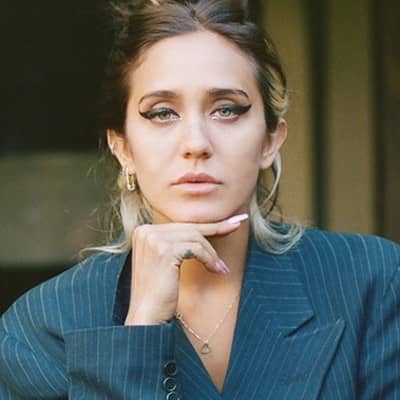 Who is Jesse Jo Stark?

Jesse Jo Stark is an American rock singer and songwriter. She has released her EP Dandelion in the year 2018.

In addition, she is in a romantic relationship with popular singer YungBlud.

She was born on 04 April 1991 in Los Angeles, California, the United States. The name of her father and mother’s name is Richard Stark and Laurie Lynn respectively.

Jesse’s ancestry is Caucasian and has a brother Kristian plus a sister named Frankie.

Talking about her academics, the details are behind the curtain.

Jesse Jo Stark is mostly known for her singing style. She is popular for her rock music and Alternative/Indie music genre.

Her first EP came out in 2014 titled Down Your Drain which gave her the limelight. Her other musical projects are Driftwood and April Flowers.

Some of her popular single tracks are Rot Away, Monster Man, Lady Bird, Dance to the Cramps, Zombie Germs, Silver Lips, and more.

As of 2022, her estimated net worth is around $9 million US. Also, her salary from her career is not calculated.

Her present love partner’s net worth is around $5 million.

This singer is keeping herself away from rumors and scandals at present. But her affair with singer YungBlud attracted the eyes of the media.

Regarding Jesse Jo Stark’s body features, her height is 5 ft 6 inches and her body weight is average. She has blue-green eyes and her long hair is brown in color.

Jesse is officially active on social networking sites. She has more than 20k followers on Twitter and over 9k on Facebook.

Her Instagram account has gained over 344k fans. On this platform, she posts her pictures mostly. Plus, her YouTube channel is subscribed to by more than 11k people.