Popular English footballer who plays as an attacking midfielder or as a winger for Premier League club Manchester United and the England national team. 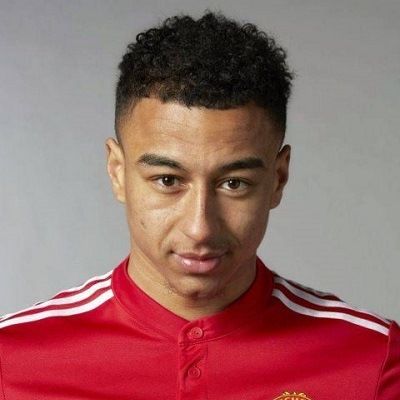 There's no better feeling than winning a trophy in front of your fans when they're celebrating.

I was at a local club, Penketh United, and Mike Glennie, a Manchester United scout, came to watch me. He spoke to my grandad and offered me trials, but there was also interest from Liverpool, and I had to pick - I was only young, but obviously my heart was with United at the time.

It definitely gives us a lot of confidence to be playing for Manchester United as a youngster, and, as long as you keep working, you are always going to get your chance.

Jesse Lingard might be currently single. However, previously he was in a relationship with Emma Hyde from 2011 until 2016.

Then, Jesse started dating actress and model, Jena Frumes, in 2017, after they met in 2016. Moreover, they parted way in 2018 because Jesse reportedly cheated on her. Jesse has not provided any information about his current relationship and affair.

Who is Jesse Lingard?

Jesse Lingard is a popular English footballer who plays as an attacking midfielder or as a winger for Premier League club Manchester United and the England national team. Likely, Lingard also made his senior debut while on loan at Leicester City in 2012.

Also, he represented England at under-17 and under-21 levels, before making his senior international debut in October 2016 and went to represent his country at the 2018 FIFA World Cup.

Jesse Lingard was born on December 15, 1992, in Warrington, England. His birth name is Jesse Ellis Lingard and he is currently 26 years old. His (father’s and mother’s name is unknown). He belongs to an average English family.

He has a sibling namely, Louie Scott. Jesse holds English- British citizenship, but his ethnicity is unknown. His birth sign is Sagittarius.

Talking about Jesse’s education history, he attended the ‘William Beaumont Community High School’. Then, he attended Ashton on Mersey School.

Lingard joined Manchester United’s youth academy at the age of seven and progressed through the age groups. Likely, he was part of the Manchester United team that won the 2010–11 FA Youth Cup, before signing a professional contract in the summer of 2011.

Jesse was also first included in a senior matchday squad on 30 November 2011, in the League Cup quarter-finals against Crystal Palace at Old Trafford, remaining unused as Sir Alex Ferguson’s team lost 2–1 after extra time. Additionally, he had his only other call-up of the season on 4 January 2012, again unused in a 3–0 away Premier League loss to Newcastle United.

Lingard was selected in the 19-man squad for Manchester United’s 2013 pre-season tour. Basically, Lingard was unavailable for Birmingham’s League Cup third-round tie because Manchester United did not want him cup-tied, then in his third league match, he made up for missing a penalty, awarded when he has fouled apparently outside the area, with an 89th-minute header to complete a 4–0 defeat of Millwall.

Similarly, on 27 February 2014, Lingard joined another Championship club, Brighton & Hove Albion, on a 93-day loan. Whereas, he scored his first goal for the club on 8 April, in a 4–1 win against former club Leicester City, who had sealed promotion to the Premier League days earlier. Whereas, while with Albion, Lingard played 17 times, including in the Championship play-offs, and scored 4 goals.

Lingard came off the bench to score the third goal in United’s 3–1 International Champions Cup Final win over Liverpool.  Swansea won 2–1 in Louis van Gaal’s first competitive match as United manager. He made his first start on 14 February, against Reading in the FA Cup.

Likely, he scored against Newcastle United in a 3–3 draw at St James’ Park, with a finish that went between the legs of the goalkeeper after a reverse assist from Wayne Rooney. Eventually, he added his third goal of the season on 2 February against Stoke City in a 3–0 victory with a closer range diving header from a cross by Cameron Borthwick-Jackson.

On 7 February 2016, Lingard scored his fourth goal of the season in a 1–1 draw against Chelsea at Stamford Bridge, breaking the deadlock with a spin and shot inside the penalty area. On 21 May 2016, Lingard scored the winning goal for Manchester United in the 2016 FA Cup Final against Crystal Palace, having come on as a second-half substitute for another goalscorer Juan Mata.

Likewise, Lingard played three times for England at the under-17 level in the 2008 Nordic Tournament. Similarly, he received his first call-up for the under-21 team for the friendly match against Scotland under-21s on 13 August 2013 and made his debut as a second-half substitute for Nathan Redmond as England won 6–0.

Moreover, he made his debut against Malta, starting on the left-wing as England won 2–0. Lingard scored his first goal on 23 March 2018, in a 1–0 win over the Netherlands in a friendly. Jesse playing for England against Colombia in the World Cup last 16

In May 2018, Lingard was named in the 23-man England squad for the 2018 FIFA World Cup. Lingard scored the equalizer in 2–1 win over Croatia which put England top of their group and qualified them for the UEFA Nations League semi-finals to be held on June 2019.

Jesse Lingard has an estimated net worth of around $8 million and he has earned that sum of money from his professional career.