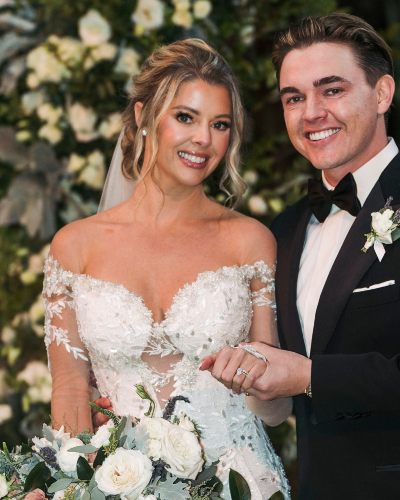 Jesse McCartney and Katie Peterson are married! The couple walked down the aisle on 23rd October 2021. They married in an outdoor wedding ceremony at Santa Lucia Preserve in Carmel, California. They wed by Peterson’s uncle and exchanged vows which they wrote themselves in a floral-filled ceremony. Their wedding was featured by their beloved dog Bailey who served as a flower girl.

“I think that moment of settling in at the altar and just watching her come down is going to be pretty special and having our families there and witnessing all of it… It’s hard not to be romantic about that portion of the night,”

He had his brother by his side as best man who wore a Brioni tuxedo with mother-of-pearl cuff links and a cream-colored shirt. Katie wore a Galia Lahav couture dress and champagne-colored Jimmy Choos. Katie added,

“It felt very rustic, and almost like my dress is coming out of the woods as well.”

Likewise, her look included a Fionna Floral bouquet of dusty rose-colored roses, eucalyptus, dusty miller, and green filler. She held it together with her mother’s wedding veil. She walked down the aisle with a bed of white rose petals to a string quartet version of Eric’s Wonderful Tonight.

Likewise, the couple engaged in September 2019 almost seven years of dating. Their reception was in a rustic barn-like structure. It was the place where Jesse had brought Katie for her birthday. She said,

“It’s breathtaking. It’s extremely whimsical and like a fairytale, truly. You’re in the middle of the redwoods and these trees are like, 800 years old and they’re massive. It’s a very special place.”

Jesse McCartney is a songwriter, singer as well as an actor. In the late 1990s, he has achieved fame in the daytime drama All My Children as JR Chandler.

He has also appeared on shows such as Law & Order: SUV, Summerland, and Greek. Read more bio…