From NFL footballer to ESPN analyst, Jesse Palmer's career journey has been quite interesting. Jesse also appeared in a reality show, The Bachelor in 2004 and dated 25 girls! 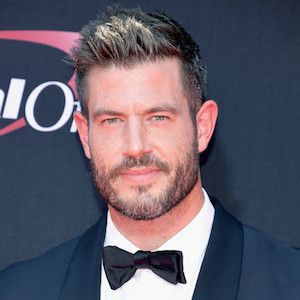 A big part of dating for men is the huntthe chase

It's difficult in my position because you are just waiting on injuries and that's often when your opportunity comes at this point into the season, ... You never wish anyone ill health, but that's the reality of the business.

Jesse Palmer is currently engaged on 8th July 2019, to Emely Fardo in Reims, France. Emely is a Brazilian model. Soon, Jesse and Emely are going to get married!

Through the show, The Bachelor, he dated 25 beautiful ladies. And from the 25 girls, he chose to give his final rose to a law student and model, Jessica Bowling. However, the couple broke up after being in a relationship for a month.

Jesse Palmer was also believed to have dated stunning Maxim model Shannon Ihrke in 2016. Since then, there are no further sightings of them together supporting this ‘could have been a relationship’.

Who is Jesse Palmer?

Canadian Jesse Palmer is an Emmy-winning Canadian host and sports analyst for ESPN. He is also a quarterback of the New York Giants who played there from 2001-2004. As of now, he is celebrated as the sports commentator for football.

He also featured in the fifth season of the reality television series ‘The Bachelor’ in 2004, and also the first non-American bachelor to be featured on the show.

Jesse Palmer was born on October 5, 1978, in Toronto, Canada. He was born to his father Bill Palmer who was a football player who played for Ottawa Rough Riders.

His mother, Susan Palmer was a co-founder of Barrett Palmer Models and former owner of the original ITM International Top Models, a modeling agency and training center located in Ottawa.

He has a brother, Billy Palmer and he does not have any sister. He was also a print model who modeled for different agencies.

He did his schooling at St. Pliu X High School in Ottawa.

In 2001, he graduated with a bachelor of arts in political science from the College of Liberal Arts and Science while he also got a Bachelor’s Degree in Science in Marketing from the College of Business Administration. Giant’s quarterback grew up in the suburb of Ottawa.

His father’s profession influenced his interest for sure. He attended the University of Florida where he focused more on football than other academic subjects. His major interest growing up was playing football.

He also played with a captain armband for Gators and was awarded Fergie Ferguson Award for astounding leadership in the pitch. This raised his career goals and was soon picked by the NFL’s New York Giants. He played for them from 2001 to 2004.

Following his departure from NFL, he played in Canadian Football League before retiring as a player to pursue a broadcasting career.

His broadcasting career started from the year 2005, in Fox sports as a color commentator. He was then appointed as an analyst on  NFL Network. In 2007, he retired from his Canadian Football League and worked as a sports analyst. Then he joined ESPN and soon he became a studio analyst.

In 2004, he appeared in the reality show, The Bachelors and went out with 25 girls. Out of them, he gave the final rose to Jessica Bowlin Rawi.

Playing for big teams in NFL and CFL accumulated him a net worth of ‎$8 Million. He has a couple of cars including Toyota Celica.

Jesse Palmer was dragged into the rumor surrounding him to be dating pro fitness model Shannon Ihrke when she posted pictures of them together on Instagram.

His well-focused personality towards his profession keeps him away from any criticism and controversies.

Jesse is the height of 6 feet 2 inches tall and weighs 99.6 kg. He has brown hair color and blue eye color. his shoe size, dress size, and body are unknown.

He also has a Youtube channel with the name, Jesse Palmer.