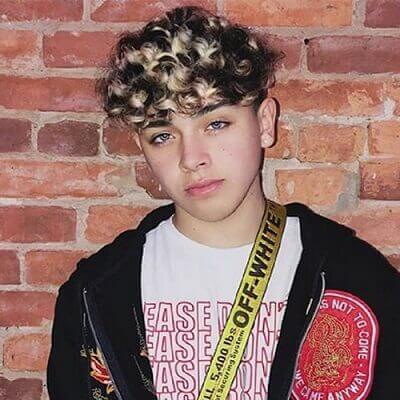 Jesse Underhill is in a relationship with the Tiktok star, Giulia Amato. The couple looks quite cute together in their Instagram pictures.

However, there is no information on when Jesse and Giulia started dating or having an affair.

Who is Jesse Underhill?

Jesse Underhill is an American social media personality. He gained fame mainly for his videos on TikTok where he has gained over 5.9 million followers. Moreover, he is also active on Youtube with over 205k subscribers.

Jesse Underhill was born in Hood River, Oregon, on July 1, 1998. As of 2020, his age is 22. There is no information about his parents. He has three brothers, Aaron, Levi, and Issac, and one sister, Rachel. Levi and Rachel are also famous as social media personalities. Both of them have hundreds of thousands of followers on their account and have gained millions of hearts.

He spent his childhood days in Hood River and his ethnicity is Caucasian.

Jesse Underhill first started gaining attention after posting on Instagram in July 2013. Over the years, his Instagram account gained hundreds of thousands of followers. He slowly started posting on TikTok, too and gained even more fame from the video sharing platform.

Underhill started posting when the app was still called ‘Musical.ly’. His videos have gained over 428.9 million likes in addition to his 5.9 million followers. His content includes comedy videos, lip-syncs, etc.

Underhill is a featured artist in Zephan Clark’s single, ‘16’. In addition to this, he also made an appearance in it’s music video which was released in January 2018.

In September 2015, he started his own Youtube channel but did not post until February 2016. His first video was titled ‘Ice Challenge Ft. Siblings’ and featured him alongside his two siblings, Rachel and Aaron. His most popular video to date is titled ‘MEET MY GIRLFRIEND *secrets out*’ which has garnered over 389k views so far. Some of his other popular videos include ‘OMG SHIP OR DIP ( TIK TOK EDITION )’, ‘CRAZY JAMES CHARLES PHONE PRANK IMPRESSION w/ Chase Keith’, ‘KISS OR DISS OMG w/ Oliver Moy | Jesse Underhill’, etc. As of July 2020, his Youtube channel has over 205k subscribers and his videos have gained over 4 million views.

Jesse stands at a height of 5 feet 8 inches and weighs around 62 kg. His hair color is brown and his eyes are blue in color.

Jesse Underhill has an estimated net worth of over $350k as of 2020. His primary source of income is social media. He has not revealed his annual salary.

Underhill has not been involved in any controversies. He has been able to keep himself away from any type of controversy and scandal. So far, he has not done anything controversial in his career. He has kept his profile clean and has simply focused on his career and personal life.

You may also like to read more about the Bio, Career, Net Worth, Relationships, Social media, and more about Mia Hayward, Olivia Ponton, Elle Fowler, and more.