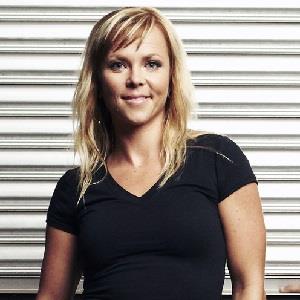 Obstacles are things a person sees when they take their eyes off the goal.

However, the news was revealed that she was once married to Ian Johnson. Ian was her co-host. But their relationship did not go well and they divorced in a short period of time.

The reason for their divorce is said to be because of Jessi’s sexual interest. There were rumors that she is a bisexual.

Who is Jessi Combs?

Jessi Combs is an American actress, television personality, and metal fabricator. She is also a famous race car driver. She is best known as the co-host of Spike TV show Xtreme 4×4.

She held the show along with Ian Johnson for four years and over 90 episodes. She is also popular as the actress of MythBusters (2003) and All Girls Garage (2012).

Jessi was born on July 27, 1983, in the Black Hills of Rapid City, SD. She is an American by nationality and her ethnicity is North-American.

There is no much information about her family and parents, as she has never talked about her personal life. But it is known that her parents were the ones who motivated her to do the interior decoration. Since her childhood, she was in love with speed and machines, hence, she wanted to be a car racing driver.

In 2004, she was educated at Wyoming Technical Institute where she studied Collision & Refinishing Core Program and graduated in 2004.

She was the top student in her class and got the scholarship. She appeared in the first season of Overhaulin.

She was interested in metal pieces, photography, leathercraft, vehicles and car racing from her childhood.

After graduation, Jessi began her career as a metal fabricator in 2005. She was hired by the WyoTech marketing department along with other students to build up a car from the ground up in six months of time for the SEMA show.

In 2005, she was selected as a co-host of the reality television show Xtreme 4×4.

In 2011, she gained media attention when she was appointed as the host of the television show “The List 1001 Car Things To Do Before You Die”.

In 2012, she became the co-host of Discovery Channel’s show Overhaulin. She is also a popular car racer. She set an official land speed record of 392.954 mph while driving at Alvord desert in 2013.

Along with hosting and racing, Combs is also a successful actress. She is famous for completing 39 episodes on the TV show All Girls Garage.

She has appeared on various TV shows including Car Fix (2014) and MythBusters (2009). She has been very successful as a television personality and car racer.

Jessi Combs: Salary and Net Worth

She has a net worth of $1 million and his salary is unknown.

There is no rumor of her dating anyone at the moment. Unlike other celebrities, Jessi has never been linked with any other celebrity stars.

A rumor was that she gave birth to a baby back in 2009, though it was just a rumor.

Jessi Combs has a height of 5 feet 7 inches. Her body weight is 53 kg. She has blonde hair and blue eye. Her body figure measures 24 inches for waist size, 35 inches for hip size. Her bra size is 34C.

Celebrity businesses in other fields besides acting!