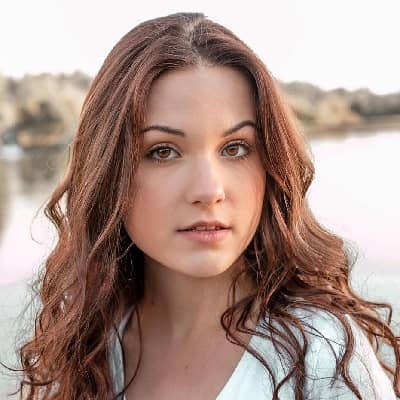 Jessica’s relationship status is married to her husband, Sam Jose. Sam Jose is a content creator and social media personality who is widely known for his Tiktok account i.e @_samjose_.

The couple got engaged in June 2020 and married on November 1, 2020. They also run their own youtube channel named ‘Sam & Jess’ which has 625k subscribers now.

Who is Jessica Baio?

Jessica Baio is a musical artist and young pop singer.

Jessica was born on 1 February 2002 in Sacramento, California, United States. Her full name is Jessica Courtney Baio. She holds an American nationality and is of mixed (Germanic and Italian) descent.

She was raised in a Mormon family with her two brothers and one sister. Her parent’s name is unknown.

Jessica began her voice classes when she was 10 years old. The artist was interested in singing from her young age.

Jessica launched her Youtube channel on 20 June 2012.  She posts covers of top artist’s songs on YouTube. She performed a cover of ‘Miley Cyrus‘s “Wrecking Ball” which became very popular. It has accused more than 6 million views. She was only 11 yrs old when sang that cover song.

After that, she started working hard focusing on her career and writing and composing her own songs. The artist has then posted various covers of top artist’s songs on her YouTube. Jessica has even released her singles, “My Angel”, “I Wish You Would Stay”,  “Mine”, “Go With the Flow” and “Do You Remember”. Her latest song was ‘if I never’ which was released on January 15, 2021.

Furthermore, she also has another Youtube channel with her husband, Sam Jose. It is entitled, Sam & Jess. They launched it on June 6, 2017, and it has collected 652K subscribers as of now.

The couple posts various blogs, pranks, and related videos on their channel. “PERIOD PRANK ON BOYFRIEND!! *CUTE REACTION*” is their most-watched videos on the channel with around 4M views.

Jessica’s net worth is estimated at around $100k to $1 million. Her primary source of income is as a singer. And she also earns from her social media.

Details regarding her house, cars, and salary are unknown.

As focusing on her career, Jessica is not involved in any kind of rumors and controversies.

The singer has a height of approximately 6 feet 3 inches. Likely, her weight is around 52 kg.

She has brown hair with light brown colored eyes.

Similarly, she has her own self-titled youtube channel with 148k subscribers. She is also active on Tiktok with 1.8M followers and around 52M likes.