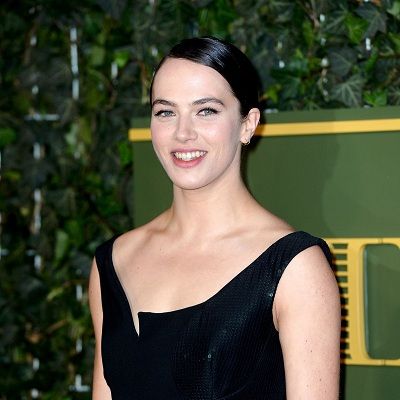 The thing I adore about acting is that it's not me: you get to experience all these emotions, but essentially it's not you. Girls in scripts are often pretty but brainless, or geeky and no one likes them, so it's great to find richer roles. Chalk and cheese aspects of people are very interesting to play. My style icons would be people like Brigitte Bardot and old Hollywood actresses who always look so stunning, cool and chic. I like classic and timeless looks.

Jessica Brown Findlay is married to Ziggy Heath. Their wedding was a surprise wedding in September 2020 in London.

She is expecting her first child with her husband Ziggy Heath through her IVF journey. Downtown Abbey’s Jessica debuted her baby bump at the Venice Film festival.

In 2017, she started dating the talented actor Ziggy Heath, who she had met on the set of the period drama series, Harlots.

Previously, she dated artist Thomas Campbell 2010 who she had met at London’s Central Saint Martins College of Art and Design.

After dating for two years the pair broke up in November 2012.

Who is Jessica Brown Findlay?

Jessica Brown Findlay is an English actress. She is popular for her role as Lady Sybil Crawley in the drama series Downton Abbey, on ITV televisions period.

She is also known for Emelia Conan Doyle in the 2011 British comedy-drama feature film Albatross. From the beginning of 2017, she portrays Charlotte Wells, a prostitute in Harlots, and played a role in drama series on Hulu Plus in the U.S.

She was born on September 14, 1989, in Cookham, Berkshire, UK. Her birth name is Jessica Rose Brown Findlay.

Beverly Findlay is her mother’s name, who worked as a teacher’s assistant and nurse. Her father’s name is Christopher Findlay, he worked as a financial advisor.

She belongs of Scottish ethnicity and British Nationality.

At the end of her General Certificate of Secondary Education (GCSEs), she chose to go to the Arts Educational School because of its A-level courses and its pastoral care.

She attended for two years; in her second year, she had three operations on her ankles, the last of which was unsuccessful. After support from an art teacher.

She completed her education at Arts Educational School, Tring Park before going to study Fine Art at the Central Saint Martins College of Arts and Design.

In 2009, she appeared in an episode of the TV show Misfits and the short film Man on a Motorcycle. In 2011, she was cast to play the lead role of Emilia Canon Doyle for Albatross which was her film debut.

Next, she was cast in two episodes of the TV show Misfits and appeared in episodes of Black Mirror. she filmed Labyrinth for two and a half months in South Africa in 2012.

In September 2016, it was proclaimed that she would play the role of Ophelia at the Almeida Theatre in London. In 2017, she famed Courtesan, in Harlots, a period drama TV series created by Alison Newman and Moira Buffini.

She played the role of Linder Sterling in the film England is mine and Fay in Monster Family.

In 2018, she played the role of Elizabeth McKenna in the film The Guernsey Literary and Potato Peel Pie Society.

In 2019, Jessica Brown Findlay and Sean Harris will lead the cast of director Christopher Smith’s horror The Banishing which tells the story of the most haunted house in England.

In 2011 she was nominated by the British Independent Film Awards as a most special commendation in Oresteia. In 2016, she secured second by Ian Charleson Awards in Uncle Vanya.

Her net worth is approximately $3 million. There is no further information about her income and salary.

In September 2014, she has become a victim of her intimate images and videos which were hacked from her Apple iCloud account which remains unrecognized. She has no record of romantic relationships known to the public.

Jessica Brown Findlay is 5 ft tall and weighs around 54 kg. Additionally, she has light blue eyes and dark brown hair.