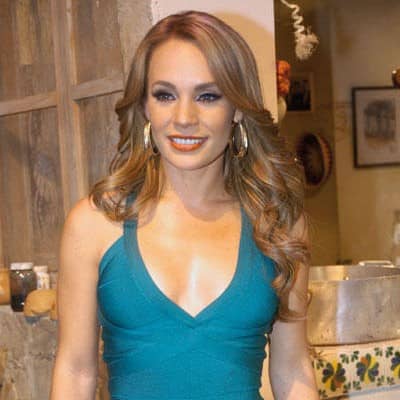 Yes, of course, I love little Sarah Jessica Parker. I love the fact that when she accepts awards, she thanks everyone she's ever met and inanimate objects that have 'been kind to her.' And I love the fact that she hasn't had a flesh-colored mole removed from her forehead (I'm not making it up

have a closer look next time she's on the screen).

Jessica Coch is single at present.

Previously, she had an affair with an actor José Ron. They worked together in Código Postal. However, the couple is not together anymore and they have not given any update on their relationship details.

In May 2010 she married the producer Roberto Gómez Fernández, son of the comedian Roberto Gómez Bolaños. They divorced in September 2011.

Who is Jessica Coch?

Coch was born on November 4, 1979, in the city of Puebla, Mexico. She is the daughter of an Argentine professional soccer player Jorge Coch and a Mexican mother, Martha Montes de Oca. She has a brother Jorge Coch.

Jessica started studying at the Centro de Educación Artística (CEA) of Televisa in the 1996 generation with only 16 years of age.

She received her first opportunities with small roles in the telenovelas Alborada and Rebelde. In 2006 she attended a casting for the juvenile telenovela Código Postal of the producer José Alberto Castro getting the antagonistic role of Johanna Villarreal, a seductive, clever, and envious character where she shared credits with Africa Zavala.

For 2007, Coch started working again with José Alberto Castro with the character of María Inés Castrejón in the telenovela Palabra de Mujer.

In 2008 Ma Pat invited her to participate as Cristina in the telenovela Juro Que Te Amo where she worked again alongside José Ron. Later in 2009, she is called by the producer Juan Osorio to work in Mi Pecado as Renata, the villain. With this character, she established herself as one of the stronger young actresses of the moment.

In late October 2011, Jessica was confirmed by the producer Ignacio Sada Madero to star alongside Zuria Vega and Gabriel Soto in the soap opera Un Refugio para el Amor, a remake of the soap opera Morelia, where she played the main antagonist of the telenovela, the same role that was interpreted by former Miss Universe Cecilia Bolocco in the previous production. She had a special appearance in the series Muchacha italiana viene a casarse. Coch was the antagonist in Amor de barrio. She stars in the series Mi marido tiene familia as the co-protagonist.

The estimated net worth of Jessica Coch is between $1 Million – $5 Million. Her primary source of income is to work as a tv actress.

She keeps away from scandals as well as rumors.

Coch has an average height of 5 feet 5 inches and a weight of 54 kg. She has brown color pairs of eyes and brown color hair.

Jessica has 830k followers on Instagram and is not active on other social media.