Updated On January 3, 2023 | Published By: Neil Richard
Share this
Married 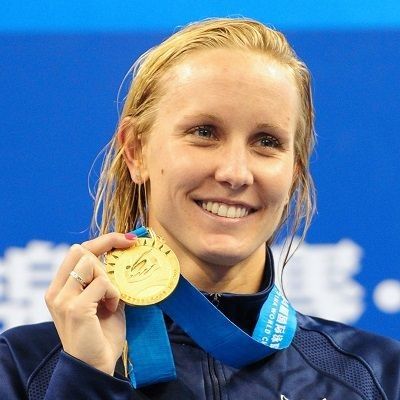 What is the relationship of Jessica Hardy?

Jessica Hardy is married to Dominik Meichtry. Meichtry is also a swimmer by profession. They married on the 5th of October 2013.

Together, in 2018, they welcome their daughter. Her Instagram posts suggest that she enjoys teaching swimming to her baby. Also, she loves cycling.

Who is Jessica Hardy?

American Jessica Hardy is a Gold Medalist in Swimming. She is renowned for the swimming strokes like breaststroke and freestyle events.

Last, she contended in the 2015- World Championship as a Team Captain.

Who are the parents of Jessica Hardy?

Jessica Hardy was born on the 12th of March 1987 in Orange, California to George Hardy and Denise Robinson.

Her mother, Denise is a psychotherapist by profession. Hardy is of English-French- Scottish ancestry.

In 2005, she graduated from Wilson Classical High School, Long Beach, California. Later, she attended the University of California in Berkeley.

While in university, she was trained by Teri McKeever and she swam for the team, California Golden Bears.

-2005, contended at the 2005 World Aquatics Championships and won two Sliver for breaststroke events, 4×100-meter medley relay. During the semifinal, she broke Leisel Jones’ world record in the 100-meter breaststroke.

-2006, Jessica Hardy was a contender for the 2006 Short Course World Championships. In the event, she won silver for the 4×100-meter medley relay and Bronze for the 50-meter breaststroke.

-2007, won Gold for 50-meter breaststroke and Silver for the 4×100-meter medley relay at the 2007 World Aquatics Championships.

In -2008, she was a contender for the Short Course World Championships in Manchester. In the event, she won three Gold which includes 4×100-meter medley, 50-meter, and 100-meter breaststroke.

-On the 6th of August 2009, she broke Yuliya Yefimova’s world record in the 50-meter long-course breaststroke by completing it with a time of 29:95.

Later, she broke her record with a time of 29.45 at FINA Swimming World Cup. She was also the overall winner in the female division in the event.

In the same year, she competed in the Pan Pacific Swimming Championships and earned four Golds which include 50-meter breaststroke, 50-meter freestyle, 4×100 m freestyle relay, and 4×100 m medley relay.

In -2013, she earned Gold for the 4×100-meter medley relay and two Bronze for 100-meter and 50-meter  breaststrokes at World Championships in Barcelona, Spain.

In -2015, she was voted as the captain of the team of the World Championship.

Jessica is also an author by profession. Last, she wrote the book, 2015- Swimming Toward the Gold Lining: How Jessica Hardy Turned Her Wounds Into Wisdom.

During the 2008 U.S. Olympic Team Trials, her second trial among the three trials came back as positive indicating the presence of low levels of clenbuterol.

Due to this, she was banned in 2009 for a year by the American Arbitration Association. Later, in 2010, the Court of Arbitration for Sport extended the suspension for one to two years.

What is Jessica Hardy’s net worth?

Jessica Hardy is a blue-eyed blonde. Her height is 6 feet and weighs 69kg.

‘So You Think You Can Dance’ Alum Valerie Rockey Married Her Boyfriend Ace Thor in Indiana Wedding Ceremony!