Jessica Korda is an American professional golf player. She has been in a relationship with her boyfriend Johnny Delprete.

She has been in a relationship with her boyfriend Johnny Delprete. Johnny who himself is the professional golfer represented as the strong support of her life when he came forward as her caddie after Jessica fired her then Caddie Jason Gilroyed at the US Women’s Open middle round. The lovely pair of these two professional golfers share a happy relationship with perfect understanding so there can be a higher possibility of them getting engaged. However, the news has not come out yet. She has maintained her personal life low that we are unaware of the initial affair date of this lovely pair. 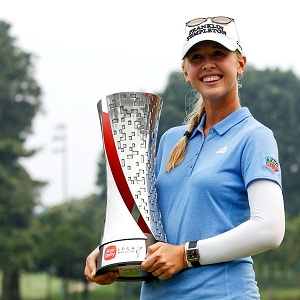 I did a lot of growing up in 2011. Going out on tour was like being thrown into the deep end of the pool, and I was not prepared for what pro life is like. I was still in high school and had a hard time finding balance. But I got some advice from Jack Nicklaus at the end of the year, and he put a lot of things in perspective. He told me that balance is the most important thing in life - and when I start mastering that is when I'm going to be the happiest

The rumor is that when I was younger, I didn't like to sweat and I didn't like to run, and both of those things are kind of important in tennis. I was introduced to a lot of sports as a child: I did gymnastics, figure skating, tennis and golf, and I dabbled a little bit in ballet. I just never fell in love with tennis the way I did with golf

I get paid to do what I love. So I can't complain about it. But it's nice to see younger girls - and boys - pick up the game of golf. It's one of the sports that you can play with literally anybody. They don't have to be good, or you can be great - it just depends. You can play with your whole family.

Who is Jessica Korda?

Korda was born Jessica Kordová, on February 27, 1993, in Bradenton, Florida, U.S. She is of Czech Jewish descent and her nationality is American.

She is the daughter of retired professional tennis players Petr Korda(father) and Regina Rajchrtová(mother). She has a sister, Nelly Korda, who joined her on the 2017 LPGA Tour after earning her card via the Symetra Tour. Korda may have played golf from an early age.

Nothing is known about her educational background and qualifications.

Korda was a member of the 2009 U.S. Junior Solheim Cup and the 2010 U.S. Curtis Cup teams. As an amateur, she won the 2010 South Atlantic Amateur and made the cut at the 2008 and 2009 U.S. Women’s Opens. She finished runner-up at the 2010 U.S. Women’s Amateur. Korda represented the Czech Republic in the World Amateur Team Championship Espirito Santo Trophy in 2006, and represented the United States in 2010, finishing tied for 4th.

She entered LPGA Tour Qualifying School in the fall of 2010 as a 17-year-old. Jessica finished runner-up in the Final Qualifying Tournament, making her eligible for full membership on the Tour in 2011.

Korda turned 18 during the second event of the 2011 season. She played in 15 events in her rookie year; her best finish was a tie for 19th at the Avnet LPGA Classic. Her first professional win was in the first event of the 2012 season, the Women’s Australian Open at Royal Melbourne.

Korda won her second LPGA Tour title at the season-opening Pure Silk-Bahamas LPGA Classic in January 2014, finishing one shot ahead of Stacy Lewis.

Jessica Korda: Salary and Net Worth

As of 2022, There is no information about her salary and net worth.

Korda was drawn into controversy after she fired her caddy in the 2013 US Women’s Open. Other than this, there are not many significant rumors or controversies regarding her.

Jessica has a height of 5 feet 11 inches. Her body weight is not known. She has blonde hair and blue eyes.