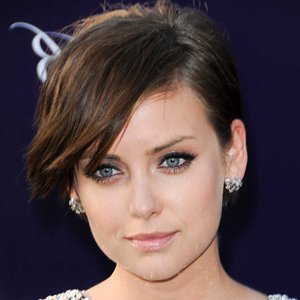 For meals, I'm big into quinoa or rocket salad with a protein like shrimp of chicken added to it

I was a part of that Beanie Babies generation. I had, like, 400 of them... OK, maybe not that many, but I had a lot of little stuffed animals that I liked to make talk. I was a big dork, and I still am

I love 'Gossip Girl.' I used to hang out with Blake Lively and Jessica Szohr. I'm also addicted to Bravo and reality shows like 'Top Chef.'

Jessica Stroup is an unmarried woman till now. She has been in a relationship with the handsome Canadian actor Dustin Milligan in her past. She began dating Dustin Milligan in the year 2008. The couple was together for two years. They broke up in 2010. Since then, she has not been in any relationship till now. According to the records, she is possibly single at the present time.

Who is Jessica Stroup?

Jessica Stroup is an American actress. She is best known for her roles as Erin Silver on the American teen drama television series 90210 and Max Hardy on the popular American television drama series The Following. She is regarded as a scream queen for starring in the horror films Prom Night, Vampire Bats, Left in Darkness, and The Hills Have Eyes 2. She is popular by her nickname Jess.

Jessica Stroup was born as Jessica Leigh Stroup on 23 October 1986, in Anderson, South Carolina, USA. She is of American nationality is American and she is of English, German and Welsh ethnicity.

She is the daughter of Judith and Don Stroup, a senior vice president at MUFG Union Bank. She spent her childhood in Charlotte, North Carolina.

She graduated from Providence High School in 2004. Jessica received a full scholarship to attend the University of Georgia but declined in order to pursue an acting career.

Jessica has been an active member in the film industry since 2005. Her first acting role was a guest appearance on the American teen sitcom Unfabulous (2005).  The same year, she played the role of Eden in the 2005 TV film Vampire Bats. She played the role of Cady Hansen on the TV series Reaper from 2007 to 2008.

In April 2008, Stroup was cast as a series regular on 90210, a reboot of the Golden Globe Award-nominated series Beverly Hills, 90210. In the series, she played the role of high school student Erin Silver. In April 2008, Stroup played the role of Claire in Screen Gems remake Prom Night.  She voiced the character Denise in Family Guy (2011-2013).  From 2014 to 2015, she played the main character Max Hardy in the TV series The Following. Currently, she portrays Joy Meachum in Iron Fist (2017).

Jessica Stroup: Salary and Net Worth

Throughout her successful acting career, she has accumulated a net worth of 3 million dollars but her salary is not revealed yet.

Jessica Stroup has the height of 5 feet 8 inches. Her body weighs 55kg. She has dark brown hair and blue eyes. As regards to her body measurement, her body figure measures 24 inches for the waist, 35 inches for hip and 32 inches for the breast. Her bra size is 30B. Furthermore, her shoe size is 9 US and the dress size is 4 US.