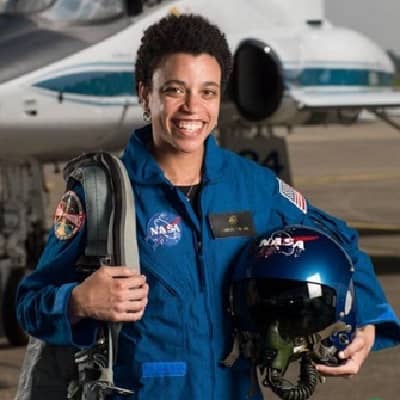 What is the relationship of Jessica Watkins?

Talking about her relationship details, Jessica Watkins is possibly single and she is not dating anyone at the moment. She seems to be busy with her career and professional details.

Moreover, the star has been secretive about her relationship details and affairs news to the public. She has kept her personal profile low-key.

Who is Jessica Watkins?

Watkins has been roped in as a mission specialist on NASA’s upcoming project, SpaceX Crew-4.

Jessica Watkins was born on 14 May 1988. At present, she is 34 years young star. Likewise, her birthplace is Gaithersburg, Maryland, the USA.

Jessica is the daughter of her father, Michael Watkins whereas her mother is Carolyn Watkins. Moreover, she has not stated her sibling’s information in the public.

Talking about her nationality, Watkins holds an American identity whereas her ethnicity is All-American.

Regarding education, the astronaut graduated from Fairview High School.

Later, she completed her bachelor’s degree in geological and environmental sciences at Stanford University and was also a member of the rugby team.

Moreover, Watkins also completed her Ph.D. degree in geology at the University of California, Los Angeles. She was a postdoctoral fellow at the California Institute of Technology.

Jessica was a former rugby player and started playing rugby during her freshman year at Stanford. She was a member of the Division I national champion team.

Moreover, she is a past American women’s national team rugby player for the sevens.

Watkins then worked at the Ames Research Center to support the Mars Phoenix lander and prototype Mars drill testing.

Initially, she worked at the Jet Propulsion Laboratory on the NEOWISE project to survey near-Earth asteroids, and she is a collaborator of the Mars rover Curiosity.

Jessica has also served as a planner for the Mars 2020 rover and a Mars sample-return mission.

Likewise, the astronaut participated in the daily planning of the Mars rover activities and uses its image data combined with orbital data to investigate the stratigraphy, geology, and geomorphology of Mars.

The star has also made her appearance in NEEMO mission 2 from June 10 to June 22, 2019. This mission tested technologies and objectives for deep space missions and lunar explorations on the seafloor.

A famed personality, Watkins has earned a handsome amount of money from her profession. She lives a lavish lifestyle along with her family.

It is reported that Jessica Watkins has an estimated net worth of $1-$5 million.

Jessica has never been part of any controversial matter or rumors till now. The geologist has been preoccupied with her professional and private life.

It seems that Watkins prefers enjoying her personal life and does not want to merge it with her professional life.

33 years young star, Jessica has beautiful looks and an admirable personality. She has not stated her exact height but seems to be more than 5 feet tall.

Furthermore, Watkins has brown eyes whereas her hair is black.

Nevertheless, the astronaut has never mentioned other physical details in the public yet.

Regarding her social media presence, Jessica Watkins is an active personality on social media. Jessica has more than 45.5k followers on her official Instagram account @astro_watkins.