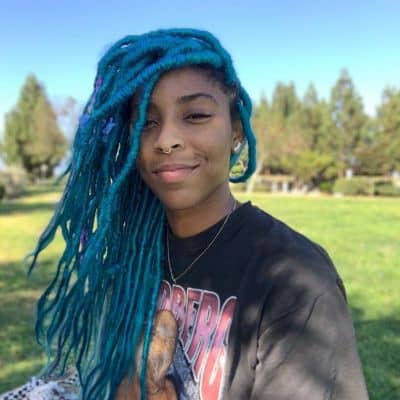 Talking about her relationship details, Jessica Williams is presently single and she is not dating anyone at the moment. She seems to be focused on her career and professional life.

Previously, Williams was linked to Blaine Spesak who is a photographer by profession. They dated for a while before separating from each other.

Who is Jessica Williams?

Jessica Williams is a well-recognized American actress and comedian.

Williams is widely famed for her work as a senior correspondent on The Daily Show and as co-host of the podcast 2 Dope Queens.

Jessica Williams was born on 31 July 1989. At present, she is 32 years young star. Likewise, her birthplace is Los Angeles County, California, the USA.

Not much is known about her father and mother’s details, Jessica has been secretive towards her family details. Moreover, she has not mentioned her sibling’s information in the public yet.

Talking about her nationality, Williams holds an American identity whereas her ethnicity is Bamileke.

Jessica started her career making a debut on her Daily Show on 11 January 2012. She is a regular performer at the Upright Citizens Brigade Theatre in Los Angeles. She has also performed on Season 3 of HBO’s Girls.

Moreover, Williams has made her appearance in the film, People Place Things in 2015. She then co-hosted the comedy podcast 2 Dope Queens alongside Phoebe Robinson. The star emerged on her last Daily Show episode on 30 June 2016.

Presently, she is the star of the 2017 Netflix comedy movie, The Incredible Jessica James. She has also worked in the sequel to Fantastic Beasts and Where to Find Them, named Fantastic Beasts: The Crime of Grindelwald.

Some of her roles in remarkable series are, Just for Kicks, The Daily Show, Girls, The Twilight Zone, I Heart Arlo, and Love Life.

A famed star, Williams has earned a handsome amount of money from her profession. She has been active in her profession from the year 2006 till the present.

It is reported that Jessica Williams has an estimated net worth of $1 million.

Jessica has never been part of any controversial matter or rumors till now. The comedian has been preoccupied with her professional and private life.

It seems that Williams prefers enjoying her personal life and does not want to merge it with her professional life.

32 years young star, Jessica has beautiful looks and an admirable personality. She stands at a height of 6feet. Also, she has a balanced body weight of 65 kg.

Furthermore, Williams has dark brown eyes whereas her hair is black.

Regarding her social media presence, Jessica Williams is an active personality on social media. Jessica has more than 304k followers on her official Instagram account @msjwilly.