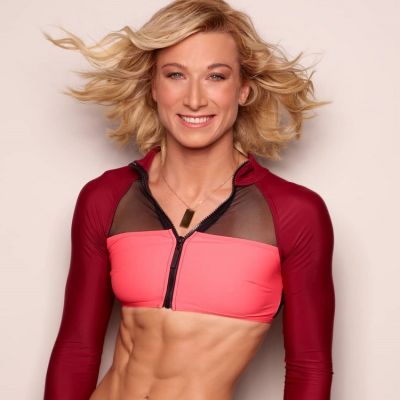 Talking about her love life, Jessie Graff is a married woman and she is happily living with her partner. The athlete announced her marriage news via her Instagram Live on 12 April 2020.

Sadly, she has not mentioned her husband’s details in the public till now. It seems Graff prefers maintaining her private details low-key. She lives in Los Angeles with her husband.

The renowned athlete, Jessie Graff spends most of her time in a chaotic work schedule. She manages her diet and makes sure to have a healthy balance of protein and carbs. As per the report, Graff starts her breakfast with an almond milk latte and a breakfast sandwich or wrap filled with eggs and as enough vegetables as possible.

Likewise, her lunch involves leafy greens, fish, chicken, beans, mixed veggies, and so on. Jessie then ends her long day finally with spicy salmon and asparagus with a dark green salad and fruit with plain Greek yogurt.

Who is Jessie Graff?

Jessica Graff is a well-recognized American professional stunt woman and athletics-based television personality. Graff is a black belt in Taekwondo, a black sash in Kung Fu, and is trained in five other styles of martial arts.

Jessie Graff was born on 12 January 1984. At present, her age is 37 years old. Likewise, her birthplace is New York City, New York, the USA.

Jessie is the daughter of her father, Tom Graff whereas her mother is Ginny MacColl.

Talking about her nationality, Graff holds an American identity whereas her ethnicity is Caucasian.

Regarding education, the athlete was a pole vaulter in high school. Later, she graduated in 2002 from Urbana High School, Frederic, Maryland, as a Track Team Leader, honor roll student, and member of the National Honor Society.

Officially, Jessie started working as a stunt performer in 2007. She appeared in different television shows and movies such as X-Men: First Cass, Make It or Break It, Another Period, Bridesmaids, Knight and Day, Bad Teacher, John Carter, Leverage, and Sons of Anarchy.

The famed gymnast in advance has performed tumbling on Make It or Break It, trampolined on Another Period, and many other stunts on rooftops. Freshly, Graff served as one of the lead actresses Gal Gadot‘s stunt doubles on Wonder Woman 1984.

The gymnast, Graff later competed in American Ninja Warrior season 12 in 2020. However, she suffered from injury to her shoulders and neck due to which it was predicted Jessie would not continue. Surprisingly, she decided to compete and survived The Titan Games without issue during treatment.

A famed multi-talented personality, Graff has earned a handsome amount of money from her multiple profession. She lives a luxurious lifestyle along with her family.

It is reported that Jessie Graff has an estimated net worth of $3.5million. Likewise, Graff is sponsored by Under Armour and has her own athletic apparel collection.

However, – has not disclosed her exact salary, earnings, and assets details till now.

Jessie has never been part of any controversial matter or rumors till now. The star has been preoccupied with her professional and private life.

It seems that Graff prefers enjoying her personal life and does not want to merge it with her professional life.

37 years old star, Jessie has gorgeous looks and an admirable personality. She stands at a height of 5feet 8inches. Also, she has a balanced body weight of 60kg.

Furthermore, Graff has blue eyes whereas her hair is blonde. She has great abs and biceps as well.

Nevertheless, the gymnast has never mentioned other physical details in the public yet.

Regarding her social media presence, Jessie Graff is an active personality on social media. Jessie has more than 578k followers on her official Instagram account @jessiegraffpwr.

She is also active on Twitter with around 40.3k followers.

Moreover, Graff is also available on Facebook with nearly 558k fans and supporters.