Jessie Mueller is an American award-winning actress and singer. 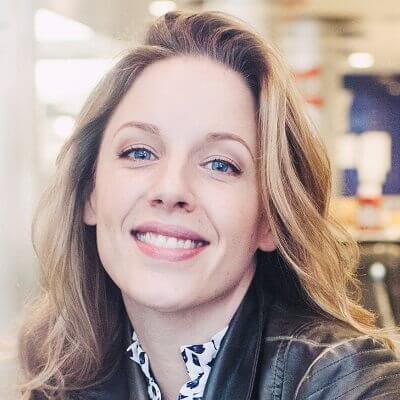 Jessie Mueller is currently in a relationship. She is dating Andy Truschinski. He is an actor and director well-known for his work in 21 Bridges, Blue Bloods, and The Root of Happiness (2017).

The couple started dating in 2009, They met in the Goodman Theatre production of ‘A Christmas Carol. Since then, they have been in a loving relationship. They currently live in New York City.

Who is Jessie Mueller?

Jessie Mueller was born Jessica Ruth Mueller on February 20, 1983, in Evanston, Illinois. As of 2020, her age is 37. She was born to her parents, Roger Mueller(father) and Jill Mueller(mother). Both of her parents are actors. Similarly, her siblings are also actors.

She has three siblings: Andrew, Matt, and Abby. Abby is also a Broadway actress like her sister and is famous for her work in Kinky Boots and Beautiful. She and Jessie both have played the main role of Carole King in the stage musical, ‘Beautiful: The Carole King Musical’. Jessie portrayed the character on Broadway and Abby on the U.S. tour. Her two brothers, Matt and Andrew act regionally. She spent her childhood days with her siblings and parents in Evanston, Illinois.

Her ancestry is German.

Talking about her education, she went to Evanston Township High School. She graduated from there in 2001. Following that, she attended Syracuse University from where she graduated in 2005.

Jessie Mueller has an estimated net worth of around $20 million. She has been able to garner such a huge net worth with her successful career as an actress. She is successful as a film and stage actress. There is no information about her annual salary.

An average actor in Broadway earns around $61k a year. However, she is expected to earn much more than that. Her estimated annual salary is a six-figure sum.

Jessie Mueller got the breakthrough of her Broadway career with her Tony and Grammy-nominated performance in the revival of ‘Carousel’ as Julie Jordan for which she also won the Drama Desk Award.

Before that, she originated the role of Jenna Hunterson in the hit Broadway musical, ‘Waitress‘ for which also she was nominated for a Drama Desk, Tony Award, and Grammy award.

For her incredible performance as Carole King in ‘Beautiful – The Carole King Musical‘, she earned all three, Grammy, Tony, and Drama Desk Awards.

In the lifetime movie, Patsy & Loretta, she portrayed the character, Loretta Lynn. Recently, she starred as Marian in The Music Man at The Kennedy Center.

Some of her other major Broadway credits include Nice Work If You Can Get It, On A Clear Day You Can See Forever, The Mystery Of Edwin Drood, etc. She also portrayed Carrie Pipperidge in Carousel at Lincoln Center.

Her upcoming work is in The Minutes at the Cort Theatre from February 25 through June 14, 2020, on Broadway.

Jessie has not been involved in any controversies. She has kept herself away from any kind of controversy or scandal. Also, she has not done anything controversial so far in her career. She has portrayed some iconic characters and her performance has always been praiseworthy. Both the audience and the critics love her performances. Similarly, there are no rumors about her.

You may also like to read the Bio, Career, Body Measurements, Net Worth, Relationships, and more about Kellie Overbey, Lizze Broadway, Nick Cordero, and more.