Jett Kenny is an Australian professional lifeguard, dancer, model, and TV personality who gained public recognization after appearing on Dancing with the Stars 2019 show. He is currently single.

Jett Kenny might be currently single. Despite the rumor regarding his relationship with Lily Cornish, he has not been linked to anyone. However, he has admitted that he is attracted to her but she has not confirmed the relationship yet. Hope, they will be together in the future as well. 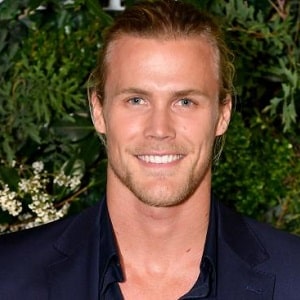 Who is Jett Kenny?

Jett Kenny is an Australian professional lifeguard, dancer, model, and TV personality who gained public recognization after appearing on Dancing with the Stars 2019 show. He seems to be in intense chemistry with his partner, Lily Cornish after their dance performance as they could not take their eyes out of each other.

He was born on November 16, 1995, in Maryborough, Queensland, Australia. He is currently 27 years old.  Her father’s name is Grant Hayden Kenny and her mother’s name is Lisa Curry. His mother is a former swimming champion and his father is a former Ironman and Olympic bronze medallist. His parents are very concerned about health and fitness. However, his parents separated in May 2009.  He has got two brothers: Jaimi Lee Kenny and Morgan Kenny. He has got a  stepsister named Beatrix.

He always wakes up at 4:20 AM and swims for an hour at 5 AM. However, he does not follow the diet for his exercise. He said in an interview that he eats whatever he wants.

Jett holds Australian citizenship but his ethnicity is unknown.

Talking about his education history, he is a  high school graduate but, he has not disclosed the name of his high school and colleges.

Jett Kenny is a model and signed with Vivien’s Model management. He often walks for designer labels. He was an ambassador for the ‘David Jones’ department store in Spring Racing Carnival.

In addition, he is a professional Lifeguard and wakes up early in the morning and swims for an hour.

He recently performed Samba with his co-partner, Lily Cornish in ‘Dancing with the Stars’ (DWTS) in 2019.

Once, he broke his shoulder while playing Oztag and admitted at Sunshine Coast’s University Hospital. The accident took place during his 24th birthday and he shared the incidence on his Instagram account and received a lot of good wished from his well-wishers.

He has an estimated net worth of around $2.5 million as of 2022, and he has earned that sum of money from his professional career.

There is a rumor that he is in an affair with his partner, Lily Cornish. The duo performed together at DWTS 2019 and he admitted that he is attracted to his on-screen partner. However, they have not confirmed their relationship.

He has a height of 6 ft. 1 inch and weighs 85 kg. Jett has blue eyes and blonde hair. He has killer abs and chiseled jawlines.

Is Jett Kenny in a relationship with his dance partner Lily Cornish?