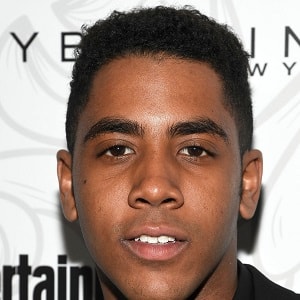 Jharrel Jerome might be currently single. Apart from rumor, he has not been linked with any other girls neither in the past nor in the present. he is currently focused towards his career. Hope, He will soon find his perfect one.

Who is Jharrel Jerome?

Jharrel Jerome is an American actor who is popular for his performance in Barry Jenkins’ drama film ‘Moonlight’ (2016) and in Ava DuVernay’s Netflix miniseries ‘When They See Us’ (2019).

He was born on October 9, 1997, in Bronx, New York, USA. He is currently 21 years old. His mother’s name is Radoyka Jerome but the father’s name is not disclosed.  He grew up in a family who he described as ‘loving’. When he was in his eighth grade, his mother suggested him to pursue an acting career and he joined the young theater group.

Regarding siblings, he has a sister. Jerome holds American citizenship but ethnicity is Afro-Dominican.

He enrolled as an undergraduate at Ithaca College. He graduated from Fiorello H. LaGuardia High School, commuting to Manhattan each day by train.

Jharrel Jerome is also active in the acting field. He is known for his appearance in his debut film ‘Moonlight’ released in 2016 in which he played the role of teenager Kevin Jones, a gay character. Moreover, he gained much name and fame from the character.

After his breakthrough performance, he was seen in the mystery thriller television series ‘Mr. Mercedes’ in which he starred in a major role of Jerome Robinson. In 2019, he appeared as Maxxie in ‘Selah and the Spades’ and Rob in ‘Robu’.

He must have earned a huge sum of money from his professional career however, he has not disclosed his exact net worth, salary, and income.

There is a rumor that he is dating a girl named Migela Acorsi but he has not confirmed the rumor.

Jharrel Jerome has a height of 5 ft. 9 inches and weighs 75 kg. Also, he has dark brown eyes and black hair. But, his shoe size, dress size, etc. are unknown.