Who is Jhay Cortez Dating?

They seem to be extremely happy in the company of each other. 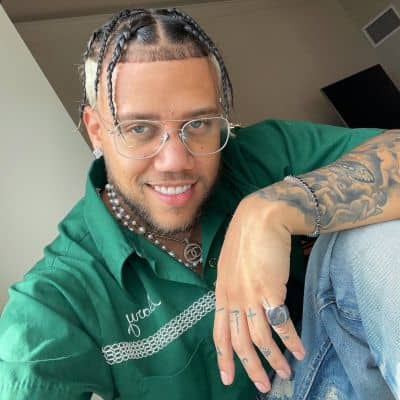 Who is Jhay Cortez?

Jhay Cortez aka Jhayco is a Puerto Rican recording artist, singer, and songwriter. Cortez is famous for his songs like, ‘No Me Conoce’, ‘Somos Iguales’, ‘Bajo Cero’ and ‘Estan Pa Mi.’

Though he has his own musical reputation, he is best known for being the fiancé of the actress and model, Mia Khalifa.

Jhay Cortez was born in the Rio Piedras, Piuerto Rico on April 9, 1993. Cortez is 29 years old as of 2022 and maintains Puerto Rican nationality.

Similarly, he has a birth zodiac sign of Aries according to the astrological chart and belongs to the African ethnicity. Jesús Manuel Nieves Cortez is his full birth name.

Furthermore, his academic details are unavailable at the moment.

Jhay Cortez started as a singer being part of a Latin pop group name,’ Stereo 4.’ It is created by the combination of four different voices including four young Peurto Ricans, Eduardo Estera, Jafet Cortes, Jesús M. Nieves, and Rubén Chinea.

After some period, Cortez decided to work as a soloist by ending the collaboration with his former group in 2016. He then signed a deal with the Univeral Music Latin Entertainment discography under the House of Haze movement. He even worked with the producer HAZE aka Fino, famous as EI Haze, and recorded his first single ‘Donde no se vea’ under the following label. He made the single by alliancing with Jory Boy and Pusho.

He went to a concert on March 16, 2018, which aimed to provide support to the victims of natural disasters with the name SXSW. He provided support in the composition of Natti Natasha’s song, ‘Criminal’ along with Ozuna and Yandel’s ‘Mi Religión.’ Under the Universal Music Latin record label, he released the EP ‘Eyez On Me’ on May 16. After releasing the single, ‘Costear’ with Almighty, he went on to release two remixes too.

His single, ‘No Me Conoce’ released on February 22, 2019, got certified as triple platinum by PROMUSICASE of Spain. He released his single, ‘Deseame Suerte’ by alliancing with Karol G. He received five ASCAP awards as a composer and two Tú Música Urbano Awards in the category of the composer of the Year and Famous ‘New Generation Album.’

Furthermore, he joined a production of Los Legendarios with the song, ‘Fiel’ along with Wisin, at the beginning of 2021. Similarly, he then earned another IHeartRadio Music Awards nomination in the iHeartRadio Music Award for Latin Pop / Reggaeton Song of the Year category for ‘Dakiti.’

As a singer, Jhay Cortez is able to accumulate a net worth of around 1.5 million USD. But, his monthly/yearly salary is not calculated yet.

Jhay Cortez released a topic called, ’24 hora’, a diss track for a fellow rapper, Bryant Myers on May 12, 2020. The two had bad arguments via Twitter after which he wrote a dissing track against Myers. Within a short period, he again released a diss track over him, titled, ‘Game Over.’ Though, Meyers did not make any serious response to Cortez’s diss track.

This several news got him into controversies amongst the fans.

Jhay Cortez is a handsome guy having impressive body statistics. Cortez is 5 feet 9 inches tall weighing around 68 Kg. Adding more, he has a couple of black eyes with hair of the same color.

However, Cortez keeps dyeing his hair in different colors.

Jhay Cortez is a social media personality as well who has huge fan followings. On Instagram and Facebook, he has more than 4.8 million and 11.9K followers respectively.

Moreover, he is available on Twitter being able to accumulate over 895.9K followers. He also has a Tktok account, enriched with around 1.4 million followers and 4.8 million likes.

Other than this, he has a self-titled youtube channel that has garnered around 4.5 million subscribers.