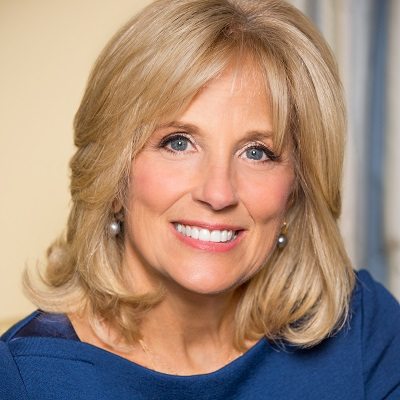 There's nothing that's more unfair or unjust than people using their power to try to make other people feel small, to tell them who they are or what they are capable of, to say their identity doesn't belong

Life is difficult, and if you sit around waiting for fun to show up, you'll find yourself going without it more often than not

People have not really noticed community colleges, but they are where students really become successful.

What is the relationship of Jill Biden?

Jill Biden is married to Joe Biden. Her husband, Joe is an American Politician. He is not the 46th president of the United States.

For the 2020 election, he has defeated the ex-president of the U.S Donald Trump.

Jill first met Joe back in March 1975 via a blind date. Joe’s brother set the date as a prank. After the first date, she was quite impressed with Joe. Later, they exchanged vows on the 17th of June 1977 at the chapel in New York City following the Catholic rituals.

Together, the couple has a daughter, Ashley Biden (born: 1981). Ashley is a social worker.

Before that, she was married to Bill Stevenson. The wedding took place in 1970. However, the former couple parted their way via divorce in 1975.

Who is Jill Biden?

Jill Biden is an educator. She is renowned as the former second lady of the United States. She is also the founder of the non-profit organization, Biden Breast Health.

Her husband is now the 46th president of the US.

What are the birth facts of Jill Biden?

Jill Biden was born as Jill Tracy Jacobs on the 3rd of June 1951 in Hammonton, New Jersey. She is of Mixed (British-Germanic-Spanish-Irish) ethnicity.

Her father, Late. Donald C. Jacobs was a bank teller by profession. Later, she became the head of the Saving & Loan Association for Chestnut Hills. Her mother, Late. Bonny Jean was a homemaker.

She spent the major part of her childhood in Willow Grove, Pennsylvania. However, she has spent most childhood traveling along with her four younger sisters.

Talking about her educational background, in 1969, she graduated from the Upper Moreland High School in Willow Grove. Later, she joined the Brandywine Junior College in Pennsylvania to study fashion merchandising. However, she dropped out of college after one semester of being unsatisfied.

Moving forward, she became a substitute teacher for St. Mark’s High School in Wilmington. In 1981, she took a break from her career as an educator to raise her daughter.

Two years after that, she resumed her career as an English teacher. At the time, she used to teach adolescent programs at Rockford Center psychiatric hospital.

In 1993, she joined the Stanton/Wilmington campus as an instructor. On the campus, she used to teach English composition and remedial writing to the students. In 2009, she joined the Northern Virginia Community College as the English profession. Since then, she is associated with the college as a professor.

Second Lady of the US

Despite being a vice president, Jill Biden still worked as an educator. Apart from that, she was also involved in various social activities. As the second lady, she advocated for military families and women’s rights.

In April 2011, she founded a national initiative, Joining Forces along with the first lady, Michelle Obama. The initiative supported the military family of the United States. The program provided educational and employment resources for the families of military personnel.

Later, she also supported USAID’s FWD campaign. The campaign worked in the awareness program related to famine, war, and drought that affected people in Africa.

Besides that, she has also worked for women’s rights too. For that, she has focused on the welfare of girls and women of Zambia, Sierra Leone, and the Democratic Republic of Congo. Also, she traveled to Japan, Korea, and Vietnam. The focus of the trip happens to be women’s educational opportunities.

She is also the president of the non-profit organization, Biden Breast Health. It provides breast health awareness programs free of charge in schools and in the state of Delaware.

On the 25th of April 2019, her husband, Joe announced his candidacy for the 2020 Presidential Campaign. Last, in June 2020, she released the children’s book, The Story of Joe Biden.

How much is the net worth of Jill Biden?

As of 2022, she has an estimated net worth of $9 million along with her husband, Joe Biden. Their net worth includes two homes in Delaware worth $4 million. Also, they have a federal pension worth more than $1 million.

To date, she has managed to maintain dignity as the second lady of the state. As of now, she has not been through any sort of controversy and scandals that created headlines in the media.

Besides that, she has managed to stay far from any type of rumors too.

Jill Biden has blue eyes with blonde hair. She stands at a height of 5 feet 6 inches and weighs 58 kg.

You may also read the bio of Jim Gray, Chirlane McCray, and Robert F Kennedy.