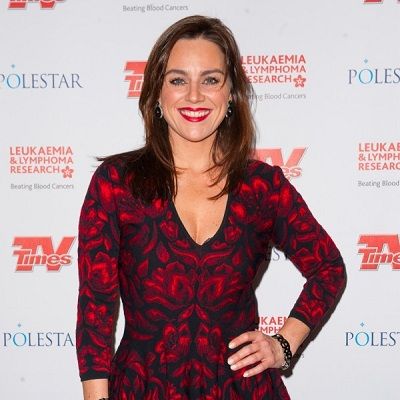 It can be disappointing when you've put your heart and soul into the project and the story line and there's this negative stuff being written.

Jill Halfpenny got married to her fellow actor Craig Conway on 3 February 2007, in a private wedding ceremony. In May 2008, they had one son child named Harver-Reece Conway.

But, due to some reason, their relationship doesn’t last long and the couple got divorced in 2010.

Then she has dated Ant McPartlin in 2016. At present, sources claimed that Jill is currently in a love affair with one guy but his name is still unknown to us.

Who is Jill Halfpenny?

Jill Halfpenny was born on 15th July 1975 in New Castle, UK. Her father’s name is Collin Halfpenny who died in 1979 when she was only four.

Her mother’s name is Maureen Mitchelson. She has two siblings, Nicola Halfpenny and Paula Halfpenny (Older Sister) and one niece Chelsea Halfpenny.

Jill belongs to English nationality and her ethnicity is unknown. She enjoys traveling and her hobbies are roller-skating, ice-skating, fencing, and dancing.

She went to the St.Edmund Campion Roman Catholic School and trained at the Webber Douglas Academy of Dramatic Art on (1994-1996).

Moreover, she has studied at the First Act Theatre, a drama school in Gosforth. Likewise, she also went to the Reavley Theatre School in Felling, Gateshead to polish her stage skills.

At the age of 14, Jill Halfpenny began her acting career in the BBC television children’s drama series. She is best known for her TV role as Rebecca Hopkins in Coronation Street, Kate Mitchell in Eastenders. Moreover, she recently involved in Izzie Redpath in Waterloo Road.

Additionally, she participated in the BBC1 show in 2004 ’Strictly Come Dancing’ with professional dancer Darren Bennett. She won the competition and scored the best score of 40 in the final round. In 2005 she started the role of Roxie Hart in the west end musical, Chicago. She played a new role adapted from an Emile Zola novel by Peter Flannery at the Newcastle.

In January 2006 Jill Halfpenny was the guest presenter and performed in the first show of the BBC four-part series’ The Sound of Musicals’. Later on, she played Roxy Ball in shameless in an episode broadcast on 31 January 2006. She won the award for best actress, a role for which was appeared in the BBC one series Waterloo Road as teacher Izzie Redpath.

Similarly, in 2007 she seemed like the narrator of Freaky Eaters for BBC three and Fat Man’s Warning for channel 4. As a part of the competition of Beamish School, she narrated a short film advertising how the National Lottery helps the North East, created by the student at Lord Lawson.

From the starting of February 2008, she played a Spike Milligan’s long-suffering manager, Norma Farnes, next to Michael Barrymore in surviving spike at the Theatre Royal, Windsor.

In addition, from 28 July to 31 October 2009, she starred in the West End production of Calendar Girls. She played the part of Paulette Bonafonte in the West End Company of Legally Blonde, which exposed January 2010 with previews beginning of December 2009. She won the Whatsonstage.com, which she played on the part until late October 2010 and was succeeded by Denise Van Outen.

In March 2012, along with Abigail’s party at the Menier Chocolate Factory in London, she played a revival of Mike Leigh’s in 1997. Before the show played at the Theatre Royal, Bath was transferred to the East End at the Wyndham’s Theatre where it ran from May to September.

In September 2014, as a part of the ceremony for the Great North Run, she narrated the history of North East England with Tim Healy.

In 2015 she starred at Chichester Festival in Way Upstream by Alan Ayckbourn. She starred in the first series of Humans in a similar year. Since 2017, she has been working alongside Sara Cox a radio broadcaster for BBC Radio 2. In 2018, she insulated the show Good Morning Sunday for August.

In 2011, she won the Theatregoer’s Choice Award for Best Supporting Actress in a musical. She was awarded “the Freedom of Gateshead”. Also, she has won the Laurence Olivier Award for best performance in a supporting role in a musical for “Legally Blonde”.

She is one of the famous British Actress who has estimated her net worth of $100,000. There is no further information about her income and salary.

She has been successful in keeping herself far from rumors and controversies in his personal and professional life. However, it was claimed that Jill is currently in a love affair with one guy but his name is still unknown to us.

Jill Halfpenny has a perfect body structure with an attractive face and a Sparkling smile. Furthermore, she belongs to a slim body figure and she stands at a height of 5 feet 4 inches tall and her weight is 60 kg.

She has got blue eyes and dark brown hair color.