Jillian Mele is a gorgeous and talentwd TV host. She is unmarried with no kids. But she is in a relationship with someone whose identity she did not reveal. 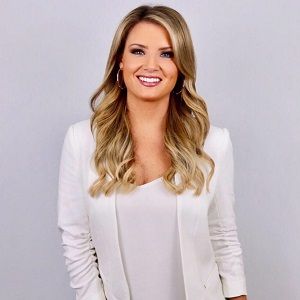 What is the relationship of Jillian Mele?

Jillian Mele is in a relationship since 26 May 2016. She has not revealed the name of her boyfriend but she has given the hint that he is from Boston. She wrote this on her social media (Twitter). She is unmarried and has no children till now.

Who is Jillian Mele?

Jillian Mele is an American journalist and news presenter. She hosts at 5 am ET alongside her co-host, Rob Schmitt. Moreover, she also reports the latest news with Steve, Ainsley, and Brian.

She is best recognized as the presenter of the show Breakfast on Broad on TCN Cable Network. She has won two Emmy Awards for her works in journalism.

Jillian Mele was born on September 17, 1982, in Philadelphia, Pennsylvania, USA. Mele is an American by nationality and she is of Native American ethnicity.

She is the daughter of Native American parents Thomas Mele (father) and Roseanna Mele (mother). Her mother is a registered nurse and she is very close to her mum. She has a younger brother.

During her childhood, she loved watching hockey and her father used to take her to watch the Philadelphia Flyers match. She also loved dancing and she is a trained ballet, tap, and jazz dancer. She said that she danced for 13 years and she stopped when she joined sports.

No matter whatever she is going through, sadness, or happiness, she shares everything with her mother. She grew up in Philadelphia with her two brothers.

Jillian Mele studied and completed her education at La Salle University majoring in art and communication. She graduated with a degree in communication in 2005. Moreover, she also attended The University of Scranton.

Furthermore, she did her internship at Comcast Sports Net in Philadelphia soon after her graduation. She went to ballet school as well.

After completing her studies, Mele began her journalism career working as a co-anchor for the evening news. Prior, she worked at O’Neill’s Food Market as a cashier in Glenside, Pennsylvania.

After that, she served as a weekday sports correspondent and news presenter in Presque. Her official TV career began during an internship at Comcast Sports Philadelphia.

Jillian Mele worked as a co-host for the evening news at Binghamton. She also served as a correspondent on WIVT and WBGH-TV. Also, she worked for NBC10 in 2007 and later joined TCN Cable Network. Since then, she works as a presenter and the sports segments anchor.

She has won two Emmy’s for her journalism. She received her first Emmy for an Olympics in 2014, and she won her second award in 2016 for tailgate special.

According to her the best time of her career was when she covered the Eagles’ Super Bowl parade in Philly.

There are rumors that she and Rob Schmitt are in a relationship. But these were never confirmed.

She is doing the best job without harming others and has been a straight person in her life, for which she has not been in any controversy yet.

Moving towards Jillian Mele’s body measurements, she has a good height of 5 feet 8 inches (173 cm) and weighs 59kg