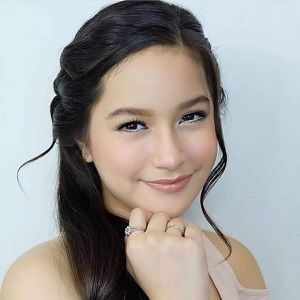 Cute and adorable Jillian an unmarried girl. She has managed to keep her personal information so secret that nothing relating her past and present affair status is published.

Being so young, it seems like she is sharpening his strength and skills to make her all dreams come true rather.

Who is Jillian Ward?

Jillian Ward is a Filipino actress. She is extremely prominent for his role in ‘Trudis Liit’, ‘Si Agimat at Si Enteng Kabisote’, and ‘Aswang’.

She has made respectable position in Filipino acting field at the young age. She is also known for commercials and also she is a good singer.

Jillian Ward was born to Asian parents on February 23, 2005, in Manila, Philippines. His nationality is Philippine and belongs to Asian ethnicity.

His mother’s name is Jennifer Ward Penzon and father’s name is unknown. He was raised up by her parents in a friendly and in an entertaining environment along with his siblings.

He was highly encouraged by his mother to secure his career in the acting field and he was also highly interested and dedicated.

There is no information published about his educational status.

Jillian Ward made her first T.V. debut in the year 2009 and appeared in a show titled ‘Eat Bulaga!’. He made his film debut and appeared in the film titled ‘Si Agimat at Si Enteng Kabisote’ as ‘Bebeng’.

She was able to receive huge positive responses from viewers and also won ‘42nd GMMSF Box-Office Entertainment Awards’ for the same film.

In 2011, she appeared in a film titled ‘Aswang’. In the same year (2011), she appeared different T.V. shows and series including ‘Captain Barbell’, ‘Daldalita’, and ‘Andres de Saya’.

Jillian Ward: Salary and Net Worth

Her salary and net worth is not published yet and is in under review.

Currently, there are no desperate rumors regarding Jillian’s personal and professional life. It seems she is doing best job without harming others for which she hasn’t been a part of controversy yet. Also, she is so young to be a part of rumors and controversy.

Jillian Ward has the height of 4 feet 11 inches. Her current body weight is not known. Besides these, she has black hair and black eyes.