Jim Broadbent is an English actor. He won an Academy Award and a Golden Globe Award for his supporting role as John Bayley in the feature film Iris. 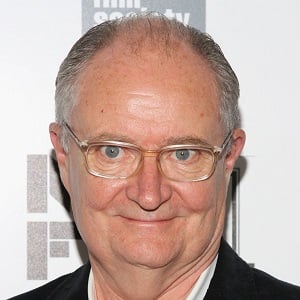 I love French films, and European films. They're not any bigger, but there's just a sort of definition, and a confidence, and strength to them. I'd always, given the option, go and see a French drama. Obviously, we probably get the better ones. But they're just sophisticated on many levels, and grown up, and quite profound - and we don't make films like that.

I always think you should be totally frivolous as much as you can, and then take the work seriously when it has to be taken seriously. As long as you can keep that balance going, it's good fun. If it's only frivolous it's not fun - it would drive me potty. On Iris, I'd never worked with Judi Dench before, but it was wonderful to realize that we worked in exactly the same way. Foolish for most of the time, then focusing on the work, clicking into it very quickly and naturally. There were a lot of laughs. Otherwise it could have been torture. Two months of being grueled.

[on declining an OBE in 2002] I didn't think I deserved it, really. And also my father died when I was 22 and he was quite an anarchic spirit, and he would have been proud of me to have turned it down. You know how it is, the usual line: 'Oh, I accepted it for my parents.' Whereas I turned it down for my parents.

Jim Broadbent is a married man. His wife is Anastasia Lewis. They married in 1987. The pair does not have any children from this relationship.

Broadbent’s marriage is going strong as there is no news regarding any extramarital affairs at present.

Who is Jim Broadbent?

Jim Broadbent is an English actor. People mostly know Jim Broadbent for his role as John Bayley in the feature film ‘Iris’.

Additionally, he also portrayed the role of Lord Longford in the television film ‘Longford’.

His mother was a sculptor and his father was an artist, furniture maker, sculptor, and interior designer. Additionally, he had a twin sister who died at birth. He developed a keen interest in acting since his childhood years. He is of British nationality. Furthermore, he belongs to an English ethnic background.

Talking about his education, Broadbent attended Leighton Park School. Additionally, he also attended art college but later transferred to the London Academy of Music and Dramatic Art. He eventually graduated in 1972.

Broadbent initially worked on the stage in plays including ‘National Theatre of Brent’. In 1978, he landed a role in ‘The Shout’. Additionally, he also played Woodcutter in ‘The Life Story of Baal’. He portrayed the role of Union Negotiator in the TV series ‘Not the Nine O’Clock News’. In 1980, he had the role of Stewart in the TV series ‘BBC2 Playhouse’.

Some other movies and television series that Broadbent has appeared in are ‘Black 47’, ‘Game of Thrones’, ‘The Sense of an Ending’, ‘Teletubbies’, ‘Bridget Jones’s Baby’, ‘War & Peace’, ‘Eddie the Eagle’, ‘London Spy’, ‘The Weather Inside’, ‘The Lady in the Van’, ‘Lives of the Infamous Comedy Blaps’, ‘The Harry Hill Movie’, ‘Le Week-End’, ‘Closed Circuit’, ‘Any Human Heart’, ‘Another Year’, ‘The Damned United’, ‘Inkheart’, ‘Hot Fuzz’, ‘The Street’, and ‘Art School Confidential’ among others.  Furthermore, he also has 5 credits as a writer.

Broadbent won the Academy Award in 2002 for his performance in ‘Iris’. Additionally, he has also won two Golden Globe Awards. He has garnered two Primetime Emmy nominations. Furthermore, he has won two BAFTA Awards. All in all, he has 23 wins and 54 nominations to his name to date.

Broadbent has not revealed his current salary. However, he has an estimated net worth of around $4 million at present.

‘Cloud Alas’ in which Broadbent appeared was part of several controversies upon its release. Additionally, the show ‘Longford’ also attracted criticisms and controversies. At present, there are no rumors concerning his life and career.

Talking about his body measurement, Jim Broadbent has a height of 6 feet 2 inches and a decent weight. Additionally, his hair color is Grey and his eye color is blue.

Broadbent is not active over social media. He does not have his official Twitter and Instagram accounts. Additionally, he is not active on Facebook as well.