Updated On January 5, 2023 | Published By: Robert Taylor
Share this
Divorce 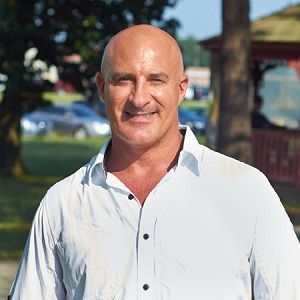 The journey is the reward.

What is the relationship of Jim Cantore?

Concerning his personal life, Jim was married to Tamra Cantore. They exchanged vows in the year 1990 but their wedding details are unknown.

Jim started going out with her when they first met at TWC. Furthermore, they had also welcomed two children named Christina and Ben.

Their married life was quite good, however, in 2006 the couple got separated. After this, Jim has been dating Andrea Butera, of CNN.

Who is Jim Cantore?

Jim Cantore is a reputed journalist and meteorologist from America.

He got huge recognition after started working with the American satellite television channel, The Weather Channel.

In addition, Jim is best known for his extraordinary works in live coverage such as Hurricanes Ike, Gustav, Katrina, Isabel, Rita, and much more.

He has American nationality. Similarly, his ethnicity is White-American. He grew up with his family in White River Junction, Vermont.

From the beginning of his childhood, he had a keen interest in the field of journalism. Furthermore, his family also supported him throughout his life.

In which school did Jim Cantore attend?

Talking about his education, Jim completed his graduation (B.S.) in Meteorology from Lyndon State College in 1986.

Jim began his journalism career as an intern in the Weather Channel as the weather forecaster soon after graduating from college. He is regarded as one of the most successful and influential live broadcasters in the United States.

In addition, he has also covered the Winter X Games and PGA tournaments.

Contributing so much in the field of natural calamities, Jim earned the membership in American Meteorological Society.

Besides this, he is also a member of the United States Red Cross.

Apart from his professional work, Jim is also active in various humanitarian and charity programs such as the Make a Wish Foundation and Michael J Fox Foundation.

With his exceptional works in the field of journalism, Jim has won several awards.

In 2002, he won the reputed NOAA-David S. Johnson Award for his extraordinary work in the use of environmental satellite technology.

How much is the net worth of Jim Cantore?

During his journalism career, he earns a decent amount of money. As per 2022’s data, he has an estimated net worth of $4.5 million. Regarding his salary, it is estimated to be in the region of $65k.

There is a rumor about Jim’s marrying another meteorologist Alexandra Steele. However, neither of them has talked about this in the public.

On January 28, 2014, while doing a live on-area report at the College of Charleston in Charleston, South Carolina, Cantore was charged by Colin Marcelli.

Cantore saw the charge and kneed Marcelli in the crotch. Colin kept running. This video has picked up upwards of 2,000,000 views on YouTube.

On October 10, 2018, while covering the landfall of Hurricane Michael in Panama City Beach, Florida, Jim had to rapidly avoid a flying bit of timber while going live.

Video of the episode was seen on Twitter in excess of 500,000 in the hour after its event.

Jim Cantore has a height of 5 ft 7 inches. Although his weight is unknown. Furthermore, his eye color is light brown and he is bald.

Where is Jim Cantore now?

What is Jim Cantore worth?